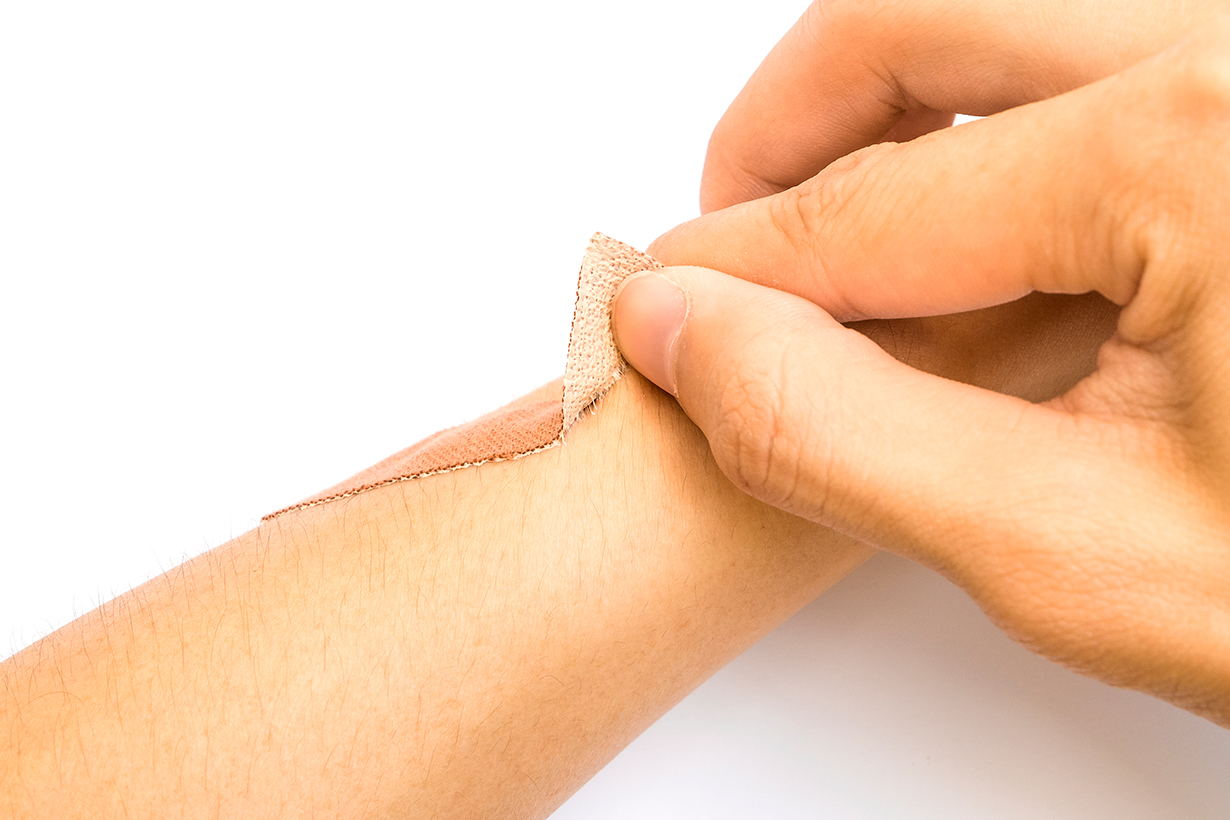 MIT engineers and researchers in South Korea have developed a sweat-proof “electronic skin” – a conformable, sensor-embedded sticky patch that monitors a person’s health without malfunctioning or peeling away, even when a wearer is perspiring. 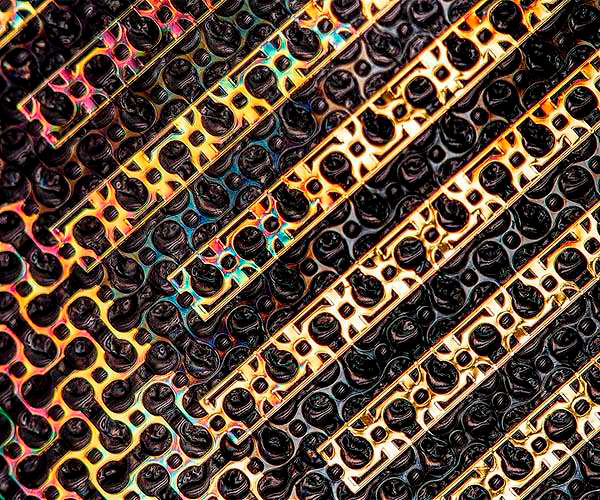 Engineers have developed a sweat-proof “electronic skin” – a conformable, sensor-embedded sticky patch that reliably monitors a person’s health, even when a wearer is perspiring. The patch contains artificial sweat ducts through the material’s ultrathin layers, pictured.

The patch is patterned with artificial sweat ducts, similar to pores in human skin, that the researchers etched through the material’s ultrathin layers. The pores perforate the patch in a kirigami-like pattern, similar to that of the Japanese paper-cutting art. The design ensures that sweat can escape through the patch, preventing skin irritation and damage to embedded sensors.

The kirigami design also helps the patch conform to human skin as it stretches and bends. This flexibility, paired with the material’s ability to withstand sweat, enables it to monitor a person’s health over long periods of time, which has not been possible with previous “e-skin” designs. The results, published in Science Advances, are a step toward long-lasting smart skins that may track daily vitals or the progression skin cancer and other conditions.

“With this conformable, breathable skin patch, there won’t be any sweat accumulation, wrong information, or detachment from the skin,” says Jeehwan Kim, associate professor of mechanical engineering at MIT. “We can provide wearable sensors that can do constant long-term monitoring.”

Kim’s co-authors include lead author and MIT postdoc Hanwool Yeon, and researchers in MIT’s departments of Mechanical Engineering and Materials Science and Engineering, and the Research Laboratory of Electronics, along with collaborators from cosmetics conglomerate Amorepacific and other institutions across South Korea.

Kim’s group specializes in fabricating flexible semiconductor films. The researchers have pioneered a technique called remote epitaxy, which involves growing ultrathin, high-quality semiconductor films on wafers at high temperature and selectively peeling away the films, which they can then combine and stack to form sensors far thinner and more flexible than conventional wafer-based designs.

Recently, their work drew the attention of the cosmetics company Amorepacific, which was interested in developing thin wearable tape to continuously monitor changes in skin. The company struck up a collaboration with Kim to fashion the group’s flexible semiconducting films into something that could be worn over long periods of time.

But the team soon came against a barrier that other e-skin designs have yet to clear: sweat. Most experimental designs embed sensors in sticky, polymer-based materials that are not very breathable. Other designs, made from woven nanofibers, can let air through, but not sweat. If an e-skin were to work over the long-term, Kim realized it would have to be permeable to not just vapor but also sweat.

“Sweat can accumulate between the e-skin and your skin, which could cause skin damage and sensor malfunctioning,” Kim says. “So we tried to address these two problems at the same time, by allowing sweat to permeate through electronic skin.”

For design inspiration, the researchers looked to human sweat pores. They found that the diameter of the average pore measures about 100 microns, and that pores are randomly distributed throughout skin. They ran some initial simulations to see how they might overlay and arrange artificial pores, in a way that would not block actual pores in human skin.

“Our simple idea is, if we provide artificial sweat ducts in electronic skin and make highly-permeable paths for the sweat, we may achieve long-term monitorability,” Yeon explains.

They started with a periodic pattern of holes, each about the size of an actual sweat pore. They found that if pores were spaced close together, at a distance smaller than an average pore’s diameter, the pattern as a whole would efficiently permeate sweat. But they also found that if this simple hole pattern were etched through a thin film, the film was not very stretchable, and it broke easily when applied to skin.

The researchers found they could increase the strength and flexibility of the hole pattern by cutting thin channels between each hole, creating a pattern of repeating dumbbells, rather than simple holes, that relaxed strain, rather than concentrating it in one place. This pattern, when etched into a material, created a stretchable, kirigami-like effect.

“If you wrap a piece of paper over a ball, it’s not conformable,” Kim says. “But if you cut a kirigami pattern in the paper, it could conform. So we thought, why not connect the holes with a cut, to have kirigami-like conformability on the skin? At the same time we can permeate sweat.”

Following this rationale, the team fabricated an electronic skin from multiple functional layers, each which they etched with dumbbell-patterned pores. The skin’s layers comprise an ultrathin semiconductor-patterned array of sensors to monitor temperature, hydration, ultraviolet exposure, and mechanical strain. This sensor array is sandwiched between two thin protective films, all of which overlays a sticky polymer adhesive.

“The e-skin is like human skin – very stretchable and soft, and sweat can permeate through it,” Yeon says.

The researchers tested the e-skin by sticking it to a volunteer’s wrist and forehead. The volunteer wore the tape continuously over a week. Throughout this period, the new e-skin reliably measured his temperature, hydration levels, UV exposure, and pulse, even during sweat-inducing activities, such as running on a treadmill for 30 minutes and consuming a spicy meal.

The team’s design also conformed to skin, sticking to the volunteer’s forehead as he was asked to frown repeatedly while sweating profusely, compared with other e-skin designs that lacked sweat permeability, and easily detached from the skin.

Kim plans to improve the design’s strength and durability. While the tape is both permeable to sweat and highly conformable, thanks to its kirigami patterning, it’s this same patterning, paired with the tape’s ultrathin form, that makes it quite fragile to friction. As a result, volunteers had to wear a casing around the tape to protect it during activities such as showering.

“Because the e-skin is very soft, it can be physically damaged,” Yeon says. “We aim to improve the resilience of electronic skin.”