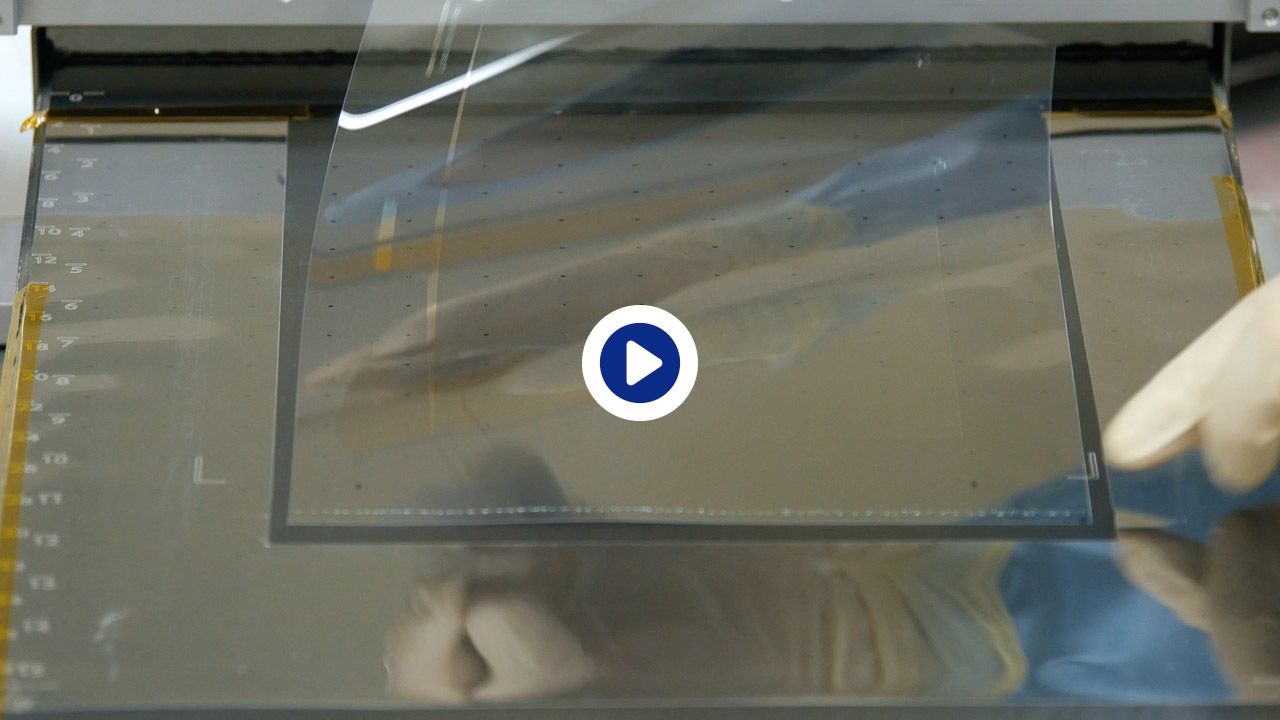 Look out for more successful collaborations between industry, academia and government in the world of microelectronics in Japan. Practical application of flexible electronics technologies has just come one step closer with a partnership between the National Institute of Advanced Industrial Science and Technology (AIST, government), Yamagata University and the University of Tokyo under the umbrella of the Japanese Ministry of Education, Culture, Sports, Science and Technology (academia), and TANAKA KIKINZOKU KOGYO (industry).

An industry, academia and government collaboration has just developed a silver wiring technology (fig. 1) with ultrafine wires less than one micron wide that can be used as transparent electrodes, while TANAKA KIKINZOKU KOGYO is moving toward commercializing a product with a planned date of January 2017 for first shipment of samples. 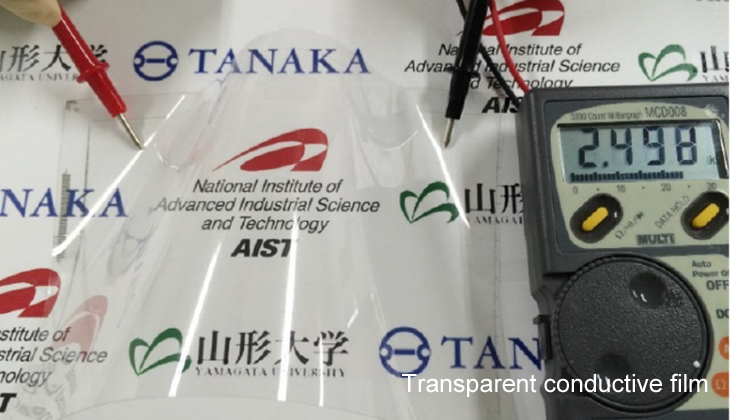 Until now, the idea of practical applications for flexible electronics was a far-off dream. Until now, the thinnest wires possible to fabricate were about 30 microns wide. This resulted in bendable flexible printed circuit (FPC) boards, that could be folded, using wiring of 100 microns or thicker. These flexible substrates were used for joining conventional rigid substrates together, with few expected applications other than that.

On top of that, there were reports that leading smartphone manufacturers would use organic EL displays as well, so for the past year attention has focused on organic EL only. However, with wire thicknesses of tens of microns, it was not possible to form the touch panel sensors needed for satisfactory organic EL displays. Wire thickness would have to be reduced to a few microns.

Compared to liquid crystal displays, organic EL displays have the advantage of flexibility so before long they will probably be used in flexible applications. In South Korea, one manufacturer is currently using organic EL displays for televisions and smartphones, but in either case the wires are formed on glass substrates so the displays do not have a great degree of bendability. In the near future, when touch sensor functionality becomes necessary for these flexible applications, indium tin oxide (ITO) will not be able to be used because it would break when the touch panel material is bent. At that point, it is hoped that highly flexible metal mesh film will be put to use.

When forming metal wires on plastic film, a heat treatment process at temperatures of 80 degrees Celsius or lower is needed because of issues with the heat resistance of film. As a result of this collaboration, a technology has been developed that enables ultrafine wires of 1 micron to be formed on flexible plastic film (PET resin) under these conditions.

Flexible substrates by AIST and ink by TANAKA

Behind the development of this technology were the initial efforts of AIST to extensively research and develop a printed electronics technology (for forming electronic circuits using printing technologies) that offered flexible characteristics. During this time, they used surface modification technologies for plastic film substrates. It was Tatsuo Hasegawa, Deputy Director of the AIST Flexible Electronics Research Center, who developed the printing technology. With his appointment in January 2014 as professor of the Department of Applied Physics, Graduate School of Engineering, Faculty of Engineering, The University of Tokyo, Hasegawa’s relationship with the university deepened. At the same time, Masato Kurihara, Professor of the Faculty of Science at Yamagata University, invented and developed a special ink with silver nanoparticles dissolved using organic solvents. TANAKA KIKINZOKU KOGYO is now conducting product development of inks with dissolved silver nanoparticles as invented at Yamagata University.

The keys to this new technology are the nanometal ink, and the manufacturing process developed by Hasegawa. The process he developed is called “SuPR-NaP” (Surface Photo-Reactive Nanometal Printing, fig.2). Firstly, a plastic film is coated with an amorphous fluoropolymer layer. The fluoropolymer layer is then irradiated to modify the surface and produce a highly activated surface. A mask is applied to the surface to create areas that prevent light passing through, with other areas where light does pass though that will become the fine wires. Like a mask substrate used in photolithography, light is passed through the pattern applied to the mask. Far ultraviolet light with a wavelength of 172 nm is required to modify the surface of the polymer layer, and this light is produced with an excimer lamp filled with xenon gas. 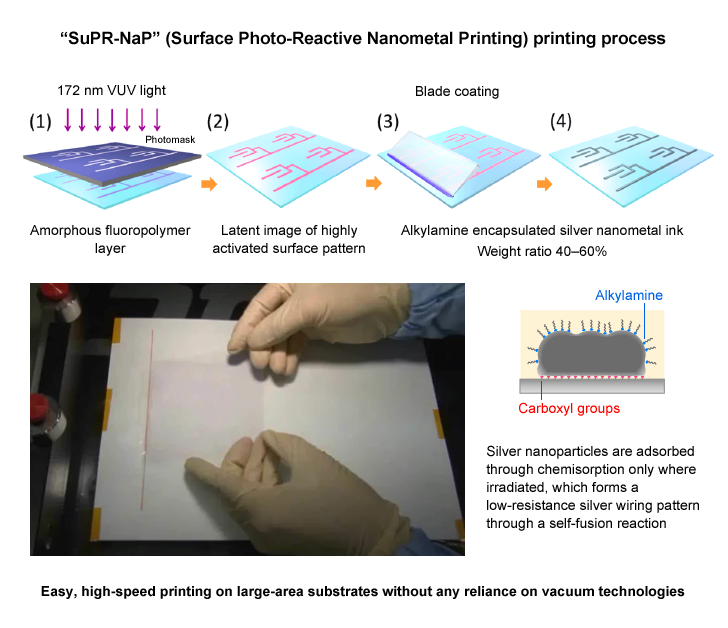 y irradiating the substrate, a latent image of a highly activated surface pattern is achieved. A squeegee, or blade, is then used to coat the surface with ink containing silver nanoparticles, dissolved by organic solvents, so that the ink adheres to the patterned area only. As a result, a silver wiring pattern is produced.

For this reason, material with alkylamine groups, that have a weak bond with silver, was used for the protective film. According to Hitoshi Kubo of the Technical Development Division at TANAKA KIKINZOKU KOGYO, while the silver surface is encapsulated, adsorption and desorption of the alkylamine group protective film occurs at equilibrium state where the amine groups are exchanged. While in this metastable condition, the silver nanoparticles in the ink can be maintained in this state for several months.

Carboxyl groups are formed in the activated polymer layer on the substrate surface, and when exposed to the 10?15 nm diameter ultrafine silver particles, the amine groups peel off and the silver nanoparticles adhere to the carboxyl groups (fig.2). Since the thickness of the activated polymer layer is about the same thickness as the pattern mask, a 1 μm thick mask contains on average 66 or 67 silver nanoparticles measuring 15 nm in diameter. Because silver particles tend to stick to each other, the silver nanoparticles aggregate at the wiring bulk and the alkylamine groups adhere to the outside of the wiring. When heat treated at 80 °C or lower, the amine groups separate and the wiring resistance drops to around one-tenth of the resistance before being heat treated. So far, the finest printed circuit board wiring achieved is 0.8 μm (fig. 3).

Wires so fine they appear invisible

Many printed circuit boards use copper rather than silver for the wiring pattern. So why has silver been used this time? Copper has a lower electrical resistance than silver so it is used for PCBs, but its flaw is that it is susceptible to oxidation. When the surface of copper oxidizes, its electrical resistance increases dramatically because oxides act as insulation. This is why copper wiring patterns and wires must be manufactured in an inert gas environment, such as nitrogen, to prevent oxidation. In the case of PCBs, after the surface of a resin substrate is printed with copper, the surface is covered with a protective film to prevent oxidation. Above all, copper ink has not been possible.

This new wiring pattern using ultrafine wires diffracts visible light, and the light wave passes around the pattern to be almost invisible. Various wiring patterns were prepared with different electrical resistivity, and then light transmittance was measured. Compared to current published data, nearly the highest level of transmittance was achieved (fig. 4). 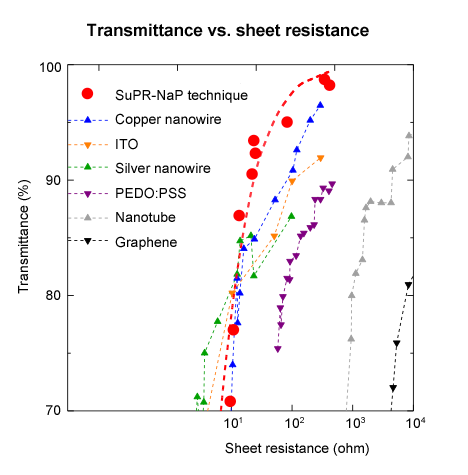 Bending tests were also performed with the idea of application to the field of flexible electronics (fig. 5). Bending fatigue testing with a radius of curvature of 5 mm was performed 10,000 times, but the electrical resistance still only changed a little. Repeating with a curvature of 2.5 mm, it was found that electrical resistance increased after about 20?30 times, but this was apparently because the PET substrate used as the base began to break down at this point. There is a high probability that this technology can be applied for use in flexible devices. 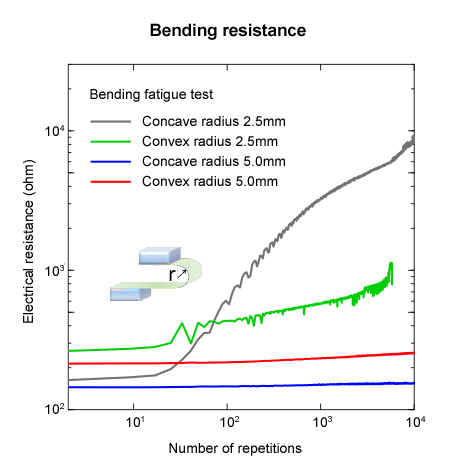 However, dendrites can form through the electron migration of the silver ions in silver wiring, so the issue of reliability remains because of shorting between electrodes. For this reason, measures must be taken to remove as much moisture as possible and to ensure the application of the protective coating. TANAKA KIKINZOKU KOGYO is apparently applying these measures.

AIST, the University of Tokyo, Yamagata University and TANAKA KIKINZOKU KOGYO submitted details of this technology development to Nature Communications, where an article was published in April 2016 (ref. 1). With a view to practical application, TANAKA KIKINZOKU KOGYO is prototyping a flexible touch panel sensor using this technology, and it plans to ship its first samples of the commercial product in January 2017. There are high expectations for flexible electronics as technologies that improve freedom of design to meet the diversified nature of wearable devices and others displays.

Presenting the possibilities of TANAKA PRECIOUS METALS,which is active in a wide range of fields.

TANAKA performs all operations related to precious metals, from bullion procurement to material processing, manufacturing, sales, and recy-cling, which allows us to offer optimal combinations of solutions to the needs of our customers.