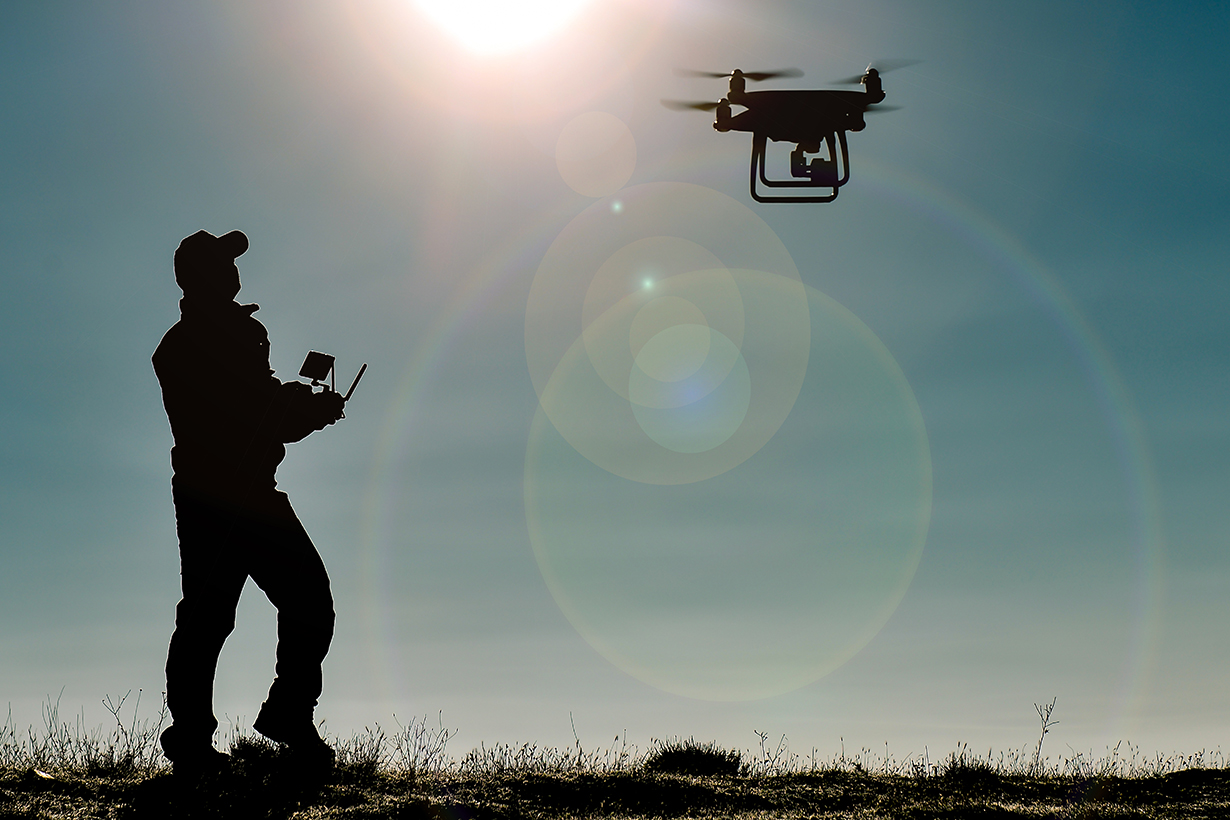 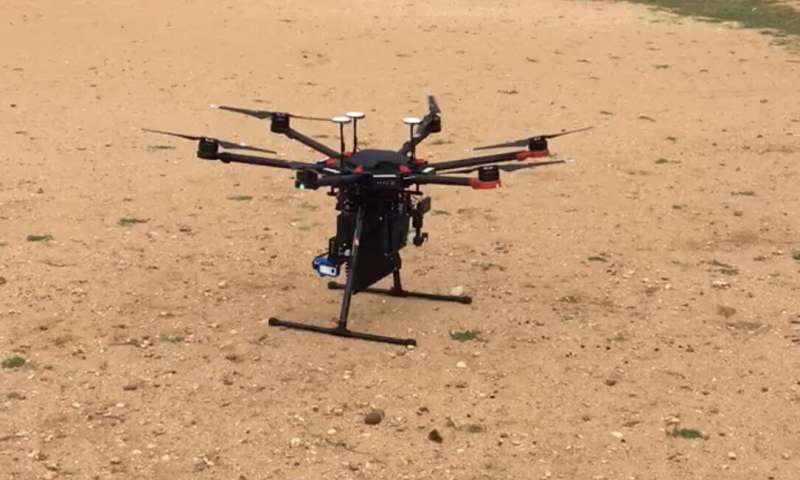 Vector-borne diseases are illnesses that can be transmitted to humans by blood-feeding insects, such as mosquitoes, ticks and fleas. Mosquitoes are known to contribute to the spread of a number of vector-borne diseases, including malaria, dengue, yellow fever and Zika.

According to the World Health Organization (WHO), this class of diseases accounts for 17% of all infectious diseases in the world, causing over 1 million human deaths per year. Developing methods to reduce the spread and prevalence of these diseases is thus of utmost importance, as it could ultimately save countless human lives.

In recent years, scientists have devised a number of control methods to reduce or manage harmful insect populations without injecting harmful chemicals into the environment. One of these methods is the sterile insect technique (SIT), a form of insect birth control that entails the use of radiation to sterilize male mosquitoes, which are then released into the air in a target area and start mating with wild female insects.

As a sterile male and a fertile female do not produce any offspring after they mate, SIT produces a decline in the insect population. In order to reduce the incidence of vector-borne diseases, however, large amounts of good quality sterile insects need to be released continuously over affected geographical areas. Techniques for the cost-effective aerial release of sterile mosquitoes over extended geographical regions are thus a bottleneck to enabling the application of SIT on a large scale.

With this in mind, researchers at the Joint Food and Agriculture Organization of the United Nations (FAO)/ International Atomic Energy Agency (IAEA) Insect Pest Control Laboratory in Vienna, WeRobotics and Biofábrica Moscamed Brasil have recently developed a system to apply the SIT using unmanned aerial vehicles (UAVs), or drones, to manage and reduce vector-borne-disease-transmitting mosquito populations. This unique system, presented in a paper published in Science Robotics, entails the release of sterile mosquitoes in the air over large geographical areas using UAVs.

“We report on a fully automated mosquito release system operated via drone,” said Jeremy Bouyer, a medical entomologist who carried out the study, who also works within the joint FAO/IAEA division of nuclear techniques in food and agriculture. “The system, tested in Brazil, enabled a uniform dispersal of sterile male Aedes aegypti mosquitoes while maintaining their quality, leading to a consistent sterile-to-wild male ratio.” 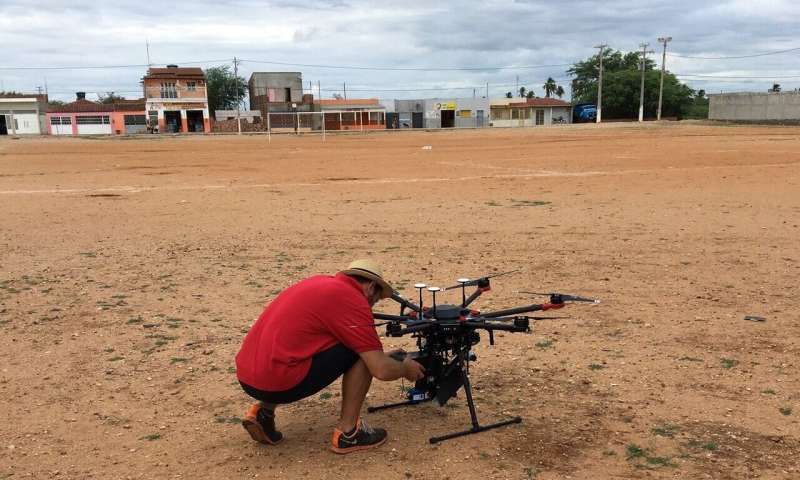 The key goal of the study carried out by Bouyer and his colleagues was to measure the survival, dispersal and sexual competitiveness of sterile male mosquitoes after they were mass-produced, sorted, handled, irradiated, marked and released within a geographical area using UAVs. The UAV-based release system they devised uses a canister in which mosquitoes are chilled down to 8-12 °C and compacted. Each canister can contain up to 50,000 sterile males. When the canister opens, the mosquitoes fall into a rotating cylinder that releases them into the open air with each of its rotations.

“The rotation speed controls the number of sterile males released per minute,” Bouyer said. “It is fully automated, and release rates can be controlled depending on the location and speed of the drone. Our findings represent a major breakthrough in the application of SIT against mosquitoes. It supports cost-efficient releases, also over areas densely populated by humans.”

So far, the researchers have evaluated the system in Brazil, with the aim of reducing the population of Aedes aegypti, a species of mosquito that can spread vector-borne diseases. Overall, they found that the sterile male insects that they released into the environment were able to compete with wild males in mating with females. This means that they effectively induced sterility in the overall Aedes aegypti mosquito population within that geographical region.

The UAV-based system for the release of sterile mosquitoes could significantly reduce the costs of SIT implementations, making them easier to carry out on a large scale. Their method could also prove to be ideal for SIT operations, as it might overcome limitations such as inaccessibility, enabling the release of sterile male mosquitoes in areas that are difficult to reach.

“In the future, it is envisioned that adult mosquitoes are irradiated when already packed into cassettes that can be shipped via courier services to release sites,” Bouyer said. “These cassettes would be loaded directly into the drones for release, eliminating the need for a release center.”

In Brazil, the researchers evaluated their mosquito release system using a drone that weighs approximately 12kg. In their next studies, however, they plan to develop a smaller UAV prototype that weighs 900g, conforms to the C1 European drone category, can take on a 200g payload of mosquitoes (~30,000 individuals) and can fly up to 15 minutes over urban areas.

“Another challenge for the large-scale application of SIT against mosquitoes is the use of more cost-effective sex-sorting technologies,” Bouyer said. “This is important to ensure no mass-reared female mosquitos are released, as they bite and transmit diseases. The IAEA, in partnership with the FAO and collaboration with other partners, is developing the technology to address this, with some trials planned soon.”

UN to test impact of mosquito sterilisation on disease spread