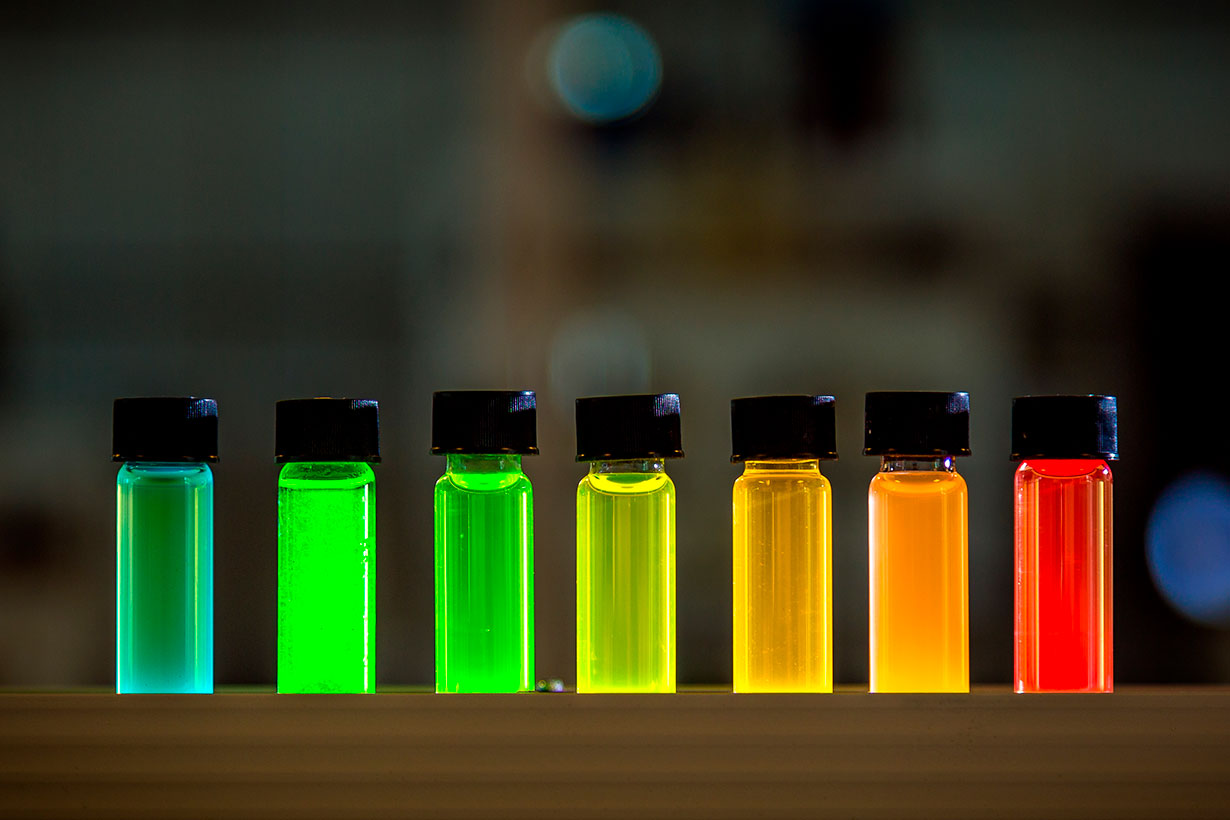 Quantum dots are manmade nanoparticles of semiconducting material comprising only a few thousand atoms. Because of the small number of atoms, a quantum dot’s properties lie between those of single atoms or molecules and bulk material with a huge number of atoms. By changing the nanoparticles’ size and shape, it is possible to fine-tune their electronic and optical properties – how electrons bond and move through the material, and how light is absorbed and emitted by it.

Thanks to increasingly refined control of the nanoparticles’ size and shape, the number of commercial applications has grown. Those already available include lasers, LEDs, and TVs with quantum dot technology.

However, there is a problem that can impair the efficiency of devices or appliances using this nanomaterial as an active medium. When light is absorbed by a material, the electrons are promoted to higher energy levels, and when they return to their fundamental state, each one can emit a photon back to the environment. In conventional quantum dots the electron’s return trip to its fundamental state can be disturbed by various quantum phenomena, delaying the emission of light to the exterior.

The imprisonment of electrons in this way, known as the “dark state”, retards the emission of light, in contrast with the path that lets them return quickly to the fundamental state and hence to emit light more efficiently and directly (“bright state”).

This delay can be shorter in a new class of nanomaterial made from perovskite, which is arousing considerable interest among researchers in materials science as a result (read more at: agencia.fapesp.br/32682/).

A study conducted by researchers in the Chemistry and Physics Institutes of the University of Campinas (UNICAMP) in the state of Sao Paulo, Brazil, in collaboration with scientists at the University of Michigan in the United States, made strides in this direction by providing novel insights into the fundamental physics of perovskite quantum dots.

“We used coherent spectroscopy, which enabled us to analyze separately the behavior of the electrons in each nanomaterial in an ensemble of tens of billions of nanomaterials. The study is groundbreaking insofar as it combines a relatively new class of nanomaterials – perovskite – with an entirely novel detection technique,” Lazaro Padilha Junior, principal investigator for the project on the Brazilian side, told Agencia FAPESP.

FAPESP supported the study via a Young Investigator Grant and a Regular Research Grant awarded to Padilha.

“We were able to verify the energy alignment between the bright state [associated with triplets] and the dark state [associated with singlets], indicating how this alignment depends on the size of the nanomaterial. We also made discoveries regarding the interactions between these states, opening up opportunities for the use of these systems in other fields of technology, such as quantum information,” Padilha said.

“Owing to the crystal structure of perovskite, the level of bright energy divides into three, forming a triplet. This provides various paths for excitation and for the electrons to return to the fundamental state. The most striking result of the study was that by analyzing the lifetimes of each of the three bright states and the characteristics of the signal emitted by the sample we obtained evidence that the dark state is present but located at a higher energy level than two of the three bright states.

To study how electrons interact with light in these materials, the group used multidimensional coherent spectroscopy (MDCS), in which a burst of ultrashort laser pulses (each lasting about 80 femtoseconds, or 80 quadrillionths of a second) is beamed at a sample of perovskite chilled to minus 269 degrees Celsius.

“The pulses irradiate the sample at tightly controlled intervals. By modifying the intervals and detecting the light emitted by the sample as a function of the interval, we can analyze the electron-light interaction and its dynamics with high temporal precision, mapping the typical interaction times, the energy levels with which they couple, and the interactions with other particles,” Padilha said.

The experimental system was developed by a team led by Steven Cundiff, principal investigator for the study at the University of Michigan. Some of the measurements were made by Diogo Almeida, a former member of Cundiff’s team and now at UNICAMP’s ultrafast spectroscopy laboratory with a postdoctoral fellowship from FAPESP under Padilha’s supervision.

Quantum dots were synthesized by Luiz Gustavo Bonato, a PhD candidate at UNICAMP’s Chemistry Institute. “The care Bonato took in preparing the quantum dots and his protocol were fundamentally important, as evidenced by their quality and size, and by the properties of the nanometric material,” said Ana Flavia Nogueira, co-principal investigator for the study in Brazil. Nogueira is a professor at the Chemistry Institute (IQ-UNICAMP) and principal investigator for Research Division 1 at the Center for Innovation in New Energies (CINE), an Engineering Research Center (ERC) established by FAPESP and Shell.

“The results obtained are very important since knowledge of the optical properties of the material and how its electrons behave opens up opportunities for the development of new technologies in semiconductor optics and electronics. The incorporation of perovskite is highly likely to be the most distinctive feature of the next generation of television sets,” Nogueira said.