Wearable electronic devices and biosensors are great tools for health monitoring, but it has been difficult to find convenient power sources for them. Now, a group of scientists from Japan has successfully developed and tested a wearable biofuel cell array that generates electric power from the lactate in the wearer’s sweat, opening doors to electronic health monitoring powered by nothing but bodily fluids.

It cannot be denied that, over the past few decades, the miniaturization of electronic devices has taken huge strides. Today, after pocket-size smartphones that could put old desktop computers to shame and a plethora of options for wireless connectivity, there is a particular type of device whose development has been steadily advancing: wearable biosensors.

These tiny devices are generally meant to be worn directly on the skin in order to measure specific biosignals and, by sending measurements wirelessly to smartphones or computers, keep track of the user’s health. 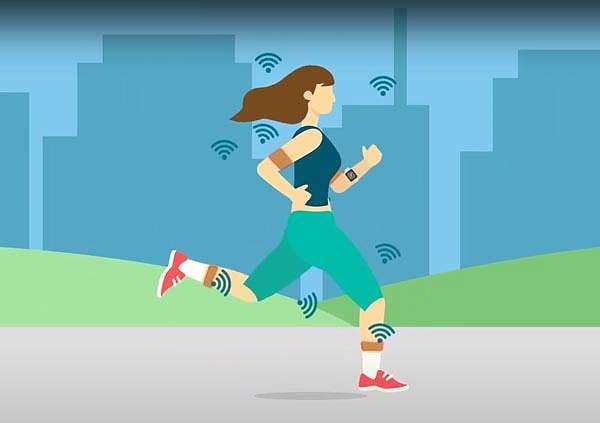 Although materials scientists have developed many types of flexible circuits and electrodes for wearable devices, it has been challenging to find an appropriate power source for wearable biosensors. Traditional button batteries, like those used in wrist watches and pocket calculators, are too thick and bulky, whereas thinner batteries would pose capacity and even safety issues. But what if we were the power sources of wearable devices ourselves?

A team of scientists led by Associate Professor Isao Shitanda from Tokyo University of Science, Japan, are exploring efficient ways of using sweat as the sole source of power for wearable electronics.

In their most recent study, published in the Journal of Power Sources, they present a novel design for a biofuel cell array that uses a chemical in sweat, lactate, to generate enough power to drive a biosensor and wireless communication devices for a short time.

The study was carried out in collaboration with Dr. Seiya Tsujimura from University of Tsukuba, Dr. Tsutomu Mikawa from RIKEN, and Dr. Hiroyuki Matsui from Yamagata University, all in Japan.

Their new biofuel cell array looks like a paper bandage that can be worn, for example, on the arm or forearm. It essentially consists of a water-repellent paper substrate onto which multiple biofuel cells are laid out in series and in parallel; the number of cells depends on the output voltage and power required.

In each cell, electrochemical reactions between lactate and an enzyme present in the electrodes produce an electric current, which flows to a general current collector made from a conducting carbon paste.

This is not the first lactate-based biofuel cell, but some key differences make this novel design stand out from existing lactate-based biofuel cells. One is the fact that the entire device can be fabricated via screen printing, a technique generally suitable for cost-effective mass production. This was possible via the careful selection of materials and an ingenious layout. For example, whereas similar previous cells used silver wires as conducting paths, the present biofuel cells employ porous carbon ink.

Another advantage is the way in which lactate is delivered to the cells. Paper layers are used to collect sweat and transport it to all cells simultaneously through the capillary effect-the same effect by which water quickly travels through a napkin when it comes into contact with a water puddle.

These advantages make the biofuel cell arrays exhibit an unprecedented ability to deliver power to electronic circuits, as Dr. Shitanda remarks: “In our experiments, our paper-based biofuel cells could generate a voltage of 3.66 V and an output power of 4.3 mW. To the best of our knowledge, this power is significantly higher than that of previously reported lactate biofuel cells.”

To demonstrate their applicability for wearable biosensors and general electronic devices, the team fabricated a self-driven lactate biosensor that could not only power itself using lactate and measure the lactate concentration in sweat, but also communicate the measured values in real-time to a smartphone via a low-power Bluetooth device.

As explained in a previous study also led by Dr. Shitanda, lactate is an important biomarker that reflects the intensity of physical exercise in real-time, which is relevant in the training of athletes and rehabilitation patients.

However, the proposed biofuel cell arrays can power not only wearable lactate biosensors, but also other types of wearable electronics. “We managed to drive a commercially available activity meter for 1.5 hours using one drop of artificial sweat and our biofuel cells,” explains Dr. Shitanda, “and we expect they should be capable of powering all sorts of devices, such as smart watches and other commonplace portable gadgets.”

Hopefully, with further developments in wearable biofuel cells, powering portable electronics and biosensors will be no sweat!