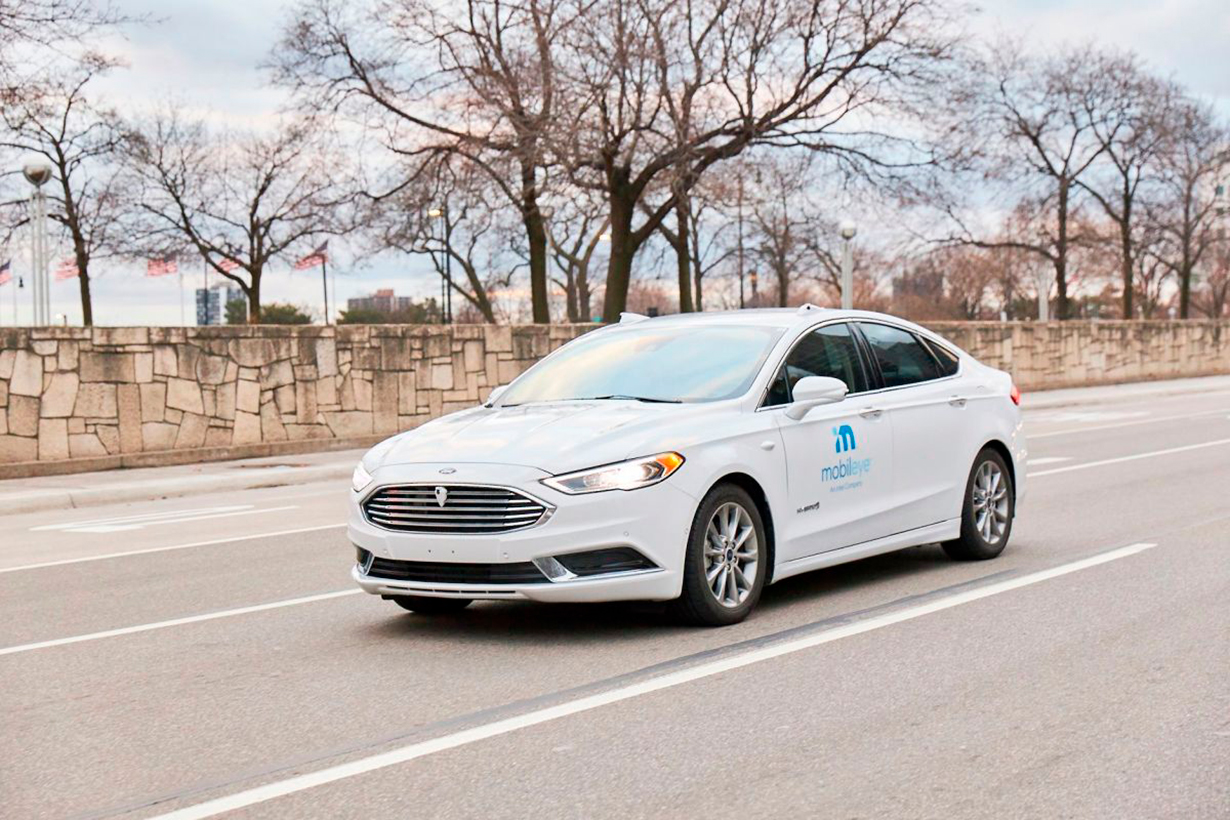 Intel sees bright future for silicon photonics, moving information at light speed in datacenters and beyond

This article is part of the Technology Insight series, made possible with funding from Intel.

It’s getting harder to improve the performance of electrical connections between compute, storage, and networking resources, so server interconnects are quickly transitioning to optical I/O to handle skyrocketing bandwidth needs in the datacenter. Intel, for example, recently disclosed that more than 5 million of its 100-gigabit optical transceivers are already providing rack-to-rack connectivity.

The company remains focused on driving low-cost and low-power optical I/O technology into servers and onto processor packages. Success will require massive scaling—from the millions of devices discussed during Labs Day 2020 to figures in the billions—creating higher-speed links between disaggregated compute, storage, and networking.

But before light can become the basis of connectivity inside servers or on accelerators, the silicon photonics industry must hit a number of milestones. Faster transceivers are right around the corner. Optics “co-packaged” with Ethernet switches have already been demonstrated, with retail availability expected in 2023. By around 2025, Intel says its autonomous driving subsidiary, Mobileye, will use photonic integrated circuits to power its next-gen light detection and ranging (LiDAR) sensor technology suite.

Turning photonics into a billion-dollar business

Intel traces its silicon photonics research back to 2004, when scientists created the first transistor-like device able to encode data onto a light beam. In 2011, the company announced a 50 Gb/s silicon photonics link created by multiplexing four hybrid silicon lasers. The technology went prime time in 2016 with the launch of a 100G PSM4 optical transceiver. The company says aggregate revenue for the 100G product line has topped $1 billion.

Demand for even more throughput is exploding. According to Equinix’s Global Interconnection Index, interconnection bandwidth is expected to increase at a 45% CAGR between 2019 and 2023, totaling 16,300 Tb/s worldwide. As data rates go up, optical links become more prevalent, even over short distances.

“When you walk into a datacenter today, you’ll see 100 Gb/s copper cables connecting servers to the top-of-rack switch,” says Robert Blum, senior director of new business and marketing at Intel. “Those cables are fine for four meters or so. But everything beyond the rack is already using optics. As we increase the data rates to 200 or 400 gigabits, the reach of copper becomes much shorter and we start seeing this trend where optics goes all the way to the server.”

Beyond transceivers: Ethernet switches with co-packaged optics are coming soon

“It was never about just these transceivers,” says Intel’s Blum. “It was about the learning curve because we knew that, down the road, optics needed to be co-packaged with Ethernet switches. And it will eventually be integrated with the CPU or XPU as well.”

Intel took its first steps toward that bolder vision back in March of 2020, when it demonstrated a 12.8 Tb/s Barefoot Tofino 2 switch co-packaged with 1.6 Tb/s integrated photonic engines passing DR4 standards-compliant 400 Gb/s Ethernet traffic. 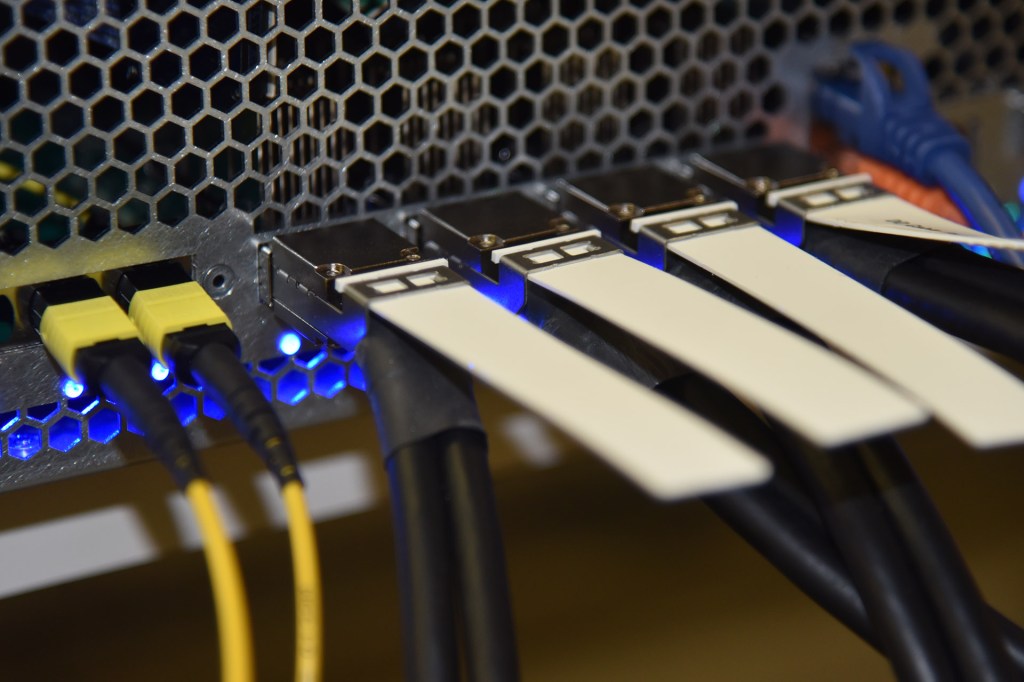 Above: Co-packaged silicon photonics engines pave the way for Ethernet switches with increased density, lower power, and the throughput to keep up with datacenter bandwidth needs. Image Credit: Intel

Bringing photonics onto the package, right next to the switch ASIC, confers several benefits, including saving power. Instead of inefficient copper traces running from the switch package to big pluggable interfaces (often with re-timers in between), fiber runs from photonics modules to a faceplate connector. Those smaller connectors also help increase density. And wafer-scale manufacturing means reliable on-chip photonics engines can be integrated at lower cost.

As switching throughput jumps from 12.8 Tb/s to 25.6 and 51.2 Tb/s over the next two generations, the number of transceivers per switch and the data rates of those transceivers will increase as well. Scaling density will favor smaller connectors, lower power, and efficient cooling.

For a sense of what that’s going to look like, Intel says its own 51.2 Tb/s solution should be ready for commercial deployment in late 2023 using 100 Gb/s lanes to expose as many as 64 pluggable interfaces for 800 Gb/s transceivers.

Above: At SEMICON West 2020, Intel presented its projections for co-packaged silicon photonics and Ethernet switching beyond 2025.

The strengths of silicon photonics extend well beyond the datacenter. Consider autonomous vehicles (AVs). Sensors being developed for Level 4 (fully automated) and Level 5 (steering wheel optional) AVs model the surrounding environment using a radar cocoon and front-facing lasers. Unfortunately, existing LiDAR systems are susceptible to interference and limited in their ability to measure the velocity of other objects.

Next-generation LiDAR overcomes those issues by looking for differences between emitted light and the reflected signal. Increased complexity makes it prohibitively expensive to produce this type of coherent LiDAR technology with discrete optics. However, building the lasers and optical amplifiers into a photonic integrated circuit drives cost down, while reliability and performance both improve. 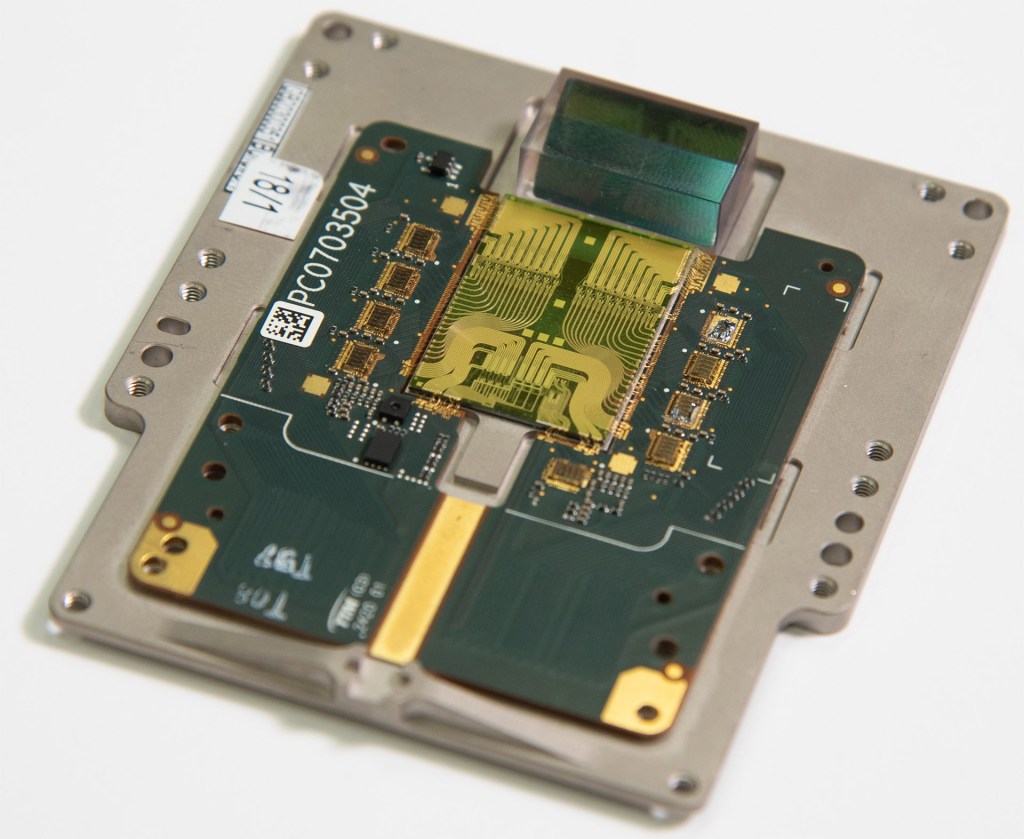 Above: Mobileye’s photonic integrated circuit for coherent LiDAR was developed at Intel’s manufacturing facility in New Mexico and should be in production by 2025. Image Credit:Intel

At this year’s CES, Mobileye announced a LiDAR system-on-chip that will combine active and passive elements to create 184 vertical lines for scanning, moved through optics. Intel plans to fabricate the SoC in the same New Mexico manufacturing facility that’s receiving a $3.5 billion investment for advanced packaging technologies. Made up of more than 6,000 individual components, this SoC is a sophisticated piece of equipment. And yet, the application of silicon photonics is expected to reduce Mobileye’s costs when it starts shipping in 2025.

“What’s unique about our platform is that we’re able to integrate those lasers, or the gain, at the wafer level,” says Intel’s Blum. “Nobody else has that in production. And this is a prime example where we have a huge value proposition by going to silicon photonics.” 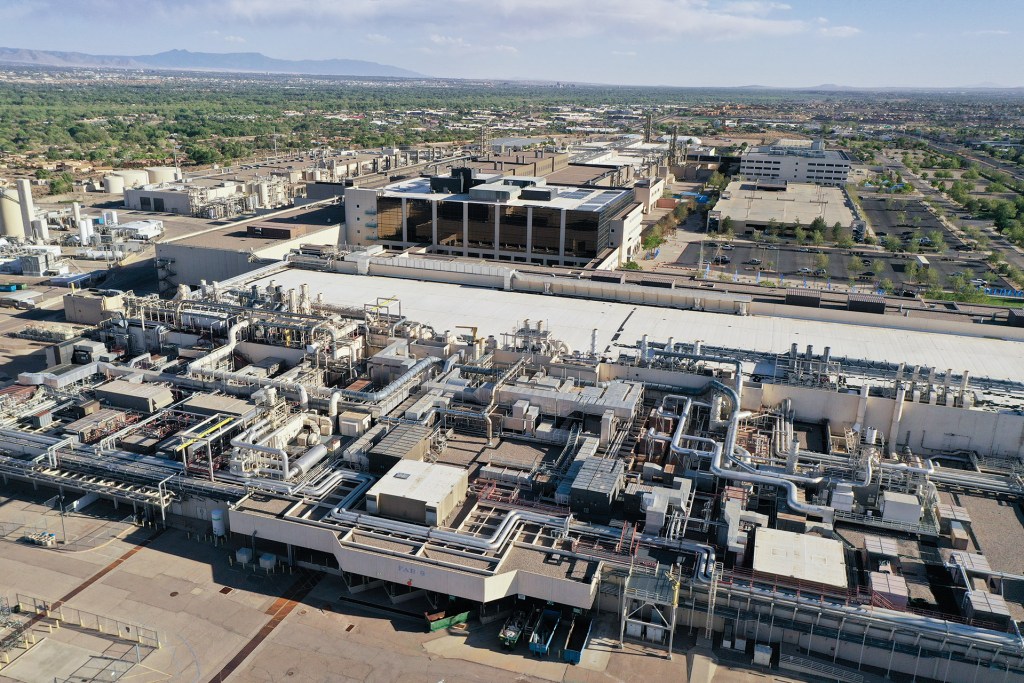 This is just the beginning

Mature, high-volume silicon photonics opens the door to additional opportunities. Blum continues, “We can use integrated optics in the biomedical space, personal health, sensing—any application where you can use lasers to detect something becomes more attractive. Some of the things that might have been cost-prohibitive or too complex for discrete optics suddenly become possible.”

There’s a strong value proposition in doing certain types of computations in the optical domain. Imagine a future with optical chips alongside CPUs used for certain machine learning workloads. That’s only possible with silicon photonics on a scalable manufacturing platform.

The technology advancements announced at Intel Labs Day 2020 portend silicon photonics inside of servers, even if optical interconnects aren’t yet on the product implementation path. But what we’ve seen from the company’s roadmaps—faster transceivers, co-packaged optics with Ethernet switches, and next-gen LiDAR for autonomous vehicles—demonstrates that the future of moving data with light is bright indeed.

This article was written by Chris Angelini from VentureBeat and was legally licensed through the Industry Dive publisher network. Please direct all licensing questions to legal@industrydive.com.