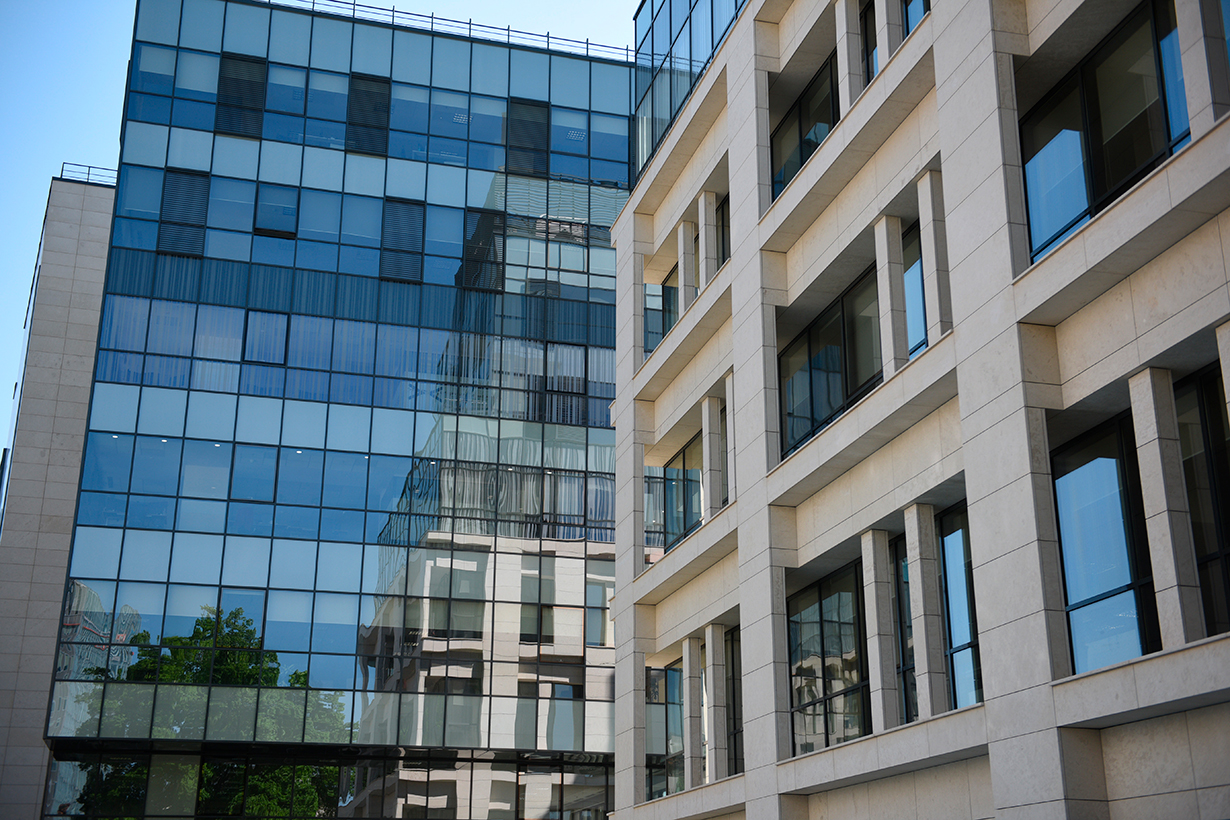 Not so long ago it may have seemed more like a futuristic vision of the workplace – or a hospital.

But the hands-free door handles, self-cleaning surfaces, antimicrobial paint, air-monitoring display tools, UV light disinfection robots, and 135 other measures at an office block in Bucharest are here to stay, say the creators behind what they are touting as one of the world’s most virus-resilient workplaces, which they hope will become the new normal in office design.

Entering H3, a five-storey building in a western neighbourhood of the Romanian capital, is like learning the steps to a new dance. A flick of the wrist opens the door, and a red line marks the spot at which to stand from where a thermal body camera 2 metres away scans arrivals for signs of fever. Those who are “green-lighted” can follow the tracks to the self-clean lift, step on one of two foot pads and be transported through the building, safe in the knowledge that a UV lighting disinfection system installed in the ventilation shafts is keeping them infection-free between floors.

Anyone whose head flashes red on the screen, however, is whisked away by a plastic-gloved “immune steward” into a nearby quarantine room: a glass box with a panic button and its own internal ventilation system shut off from the rest of the building. A “Viruskiller” apparatus on the wall, boasting three levels of fan strength, promises to remove anything nasty such as pollutants, mould or spores that may be infecting the air, with back up provided by a sanitising UV light on the wall.

This view of the future may alarm some. Modelled on hospital technology, is this sanitised environment a place to which employees will want to return once the pandemic is considered sufficiently under control? In Romania, just as elsewhere in Europe, the majority of office workers were confined to home for much of the past 18 months. Surveys show many are nervous about the prospect of coming back.

“The point is to reassure them. We don’t want people to panic,” says Gavin Bonner, one of the main coordinators behind the Immune building standard project, which has brought together health professionals, architects, engineers, IT and building managers from around the world to help corporations prepare for post-pandemic life.

The publicly available standard, trademarked Immune, has already been applied to several buildings in the UK. Its developers include the leading Romanian property company Genesis, also the H3 landlord, and the project has cost about €1m (£850,560). More than a dozen other buildings, from the US to Singapore, are in the process of obtaining their Immune certification, according to Liviu Tudor, the CEO of Genesis. The H3 building, as the most protected space so far, acts as the showroom, incorporating all 135 of the recommended measures.

The project is open source “in an effort to pool the best ideas”, says Tudor, who has lodged an application with the EU in the hope it will form the basis for a new standard across the bloc, similar to conventional fire safety codes. It embraces everything from technological innovation and scientific knowledge to workplace psychology, he says, and he hopes it will embolden both employers and employees, millions of whom are now engaged in an intense conversation about whether it is safe to return to the office – and if so, how.

The project is, in effect, Tudor’s attempt to help revive the commercial real estate industry, shunned by investors at the height of the pandemic. He is keenly aware of the risks to his business if companies decide they no longer need, or cannot afford, office space.

The Swedish telecommunications company Ericsson is the current occupant of H3, a 15,500 sq metre space that has been retrofitted over the past year at a cost of €375,000, split between the company and the landlord. Normally there would be 2,000 employees in the office. Now there is just a smattering of them, occupying well-spaced desks or meeting rooms, which they reserve through a digital booking tool to avoid overcrowding. After the summer an initial 20% of the workforce is expected to return.

“We need to gain people’s confidence, to reassure them that we’ve done everything to protect the building’s health so as to protect theirs, and we want to give them as much information as possible,” said a representative of the company in Romania, who wished to remain anonymous.

As communication is considered key, employees are encouraged to use a large screen in the entrance foyer, called a digital twin display, to “take the building’s pulse” as Genesis’s IT manager, Dragoș Cozma, puts it. He demonstrates a detailed 3D map of the entire building, with touch points displaying the array of “immunity-boosting” measures.

Staff are invited to check on everything from how many bottles of rubbing alcohol are left in the store cupboard, to how much radon, volatile organic compounds (VCOs), carbon dioxide or humidity is inside the building. They can compare the levels on different floors and to previous days, or watch videos explaining the science behind the reverse osmosis water purifier in the cellar, the technology behind the Viruskiller machine, or the sensors fitted to prevent legionnaires’ disease, which was detected in the pipes during lockdown.

“Being IT specialists, the employees appreciate this gadget-like approach,” the company representative says.

Elsewhere, simpler measures include doors fitted with attachments allowing them to be opened with an elbow or lower arm. Fittings and floors have been given rounded edges wherever possible, as fewer corners mean germs have less chance to gather.

Toilet cubicles are floor to ceiling, as it is considered safest for people to be enclosed in their own cubicle with air conditioning as there is not the recommended 2-metre distance from the next toilet. At night, a 1.2 metre tall robot traverses the building, using UV light to disinfect and eliminate pathogens. During the day, hydrogen peroxide ions are emitted from strategic points in the ventilation system: transparent panels have been fitted in the ceiling so that the mechanism can be seen. “Visibility is everything,” says Bonner.

Ultimately, is this anything more than what has been referred to as “hygiene theatre”? There is a question as to whether investing millions of euros to refit a building is worth it, given that the spread of coronavirus partly relies on human behaviour. The scientific consensus is that Covid spreads through droplets and aerosol particles in the air, and rarely via surfaces. In general, the advice has been to avoid indoor spaces.

But in his office at Cotroceni, a painstakingly restored former royal residence in Bucharest, Tudor, an aircraft engineer before he went into property and amassed 150,000 sq m of office space in Romania, argues that this is far more than theatrics. He frames his concept of a “healthy building” as the next logical step in the history of adapting architecture to dangers.

“First there were roofs and walls,” he says. “Later came seismic and fire codes, and more recently measures to tackle pollution and make buildings more sustainable. Now, in the era of a pandemic, it is time to make them adapt to that, and to other far-from-outlandish threats, whether bacteriological or toxicological. It’s not going to be enough just to move the desks further apart.”

This article was written by Kate Connolly in Bucharest from The Guardian and was legally licensed through the Industry Dive publisher network. Please direct all licensing questions to legal@industrydive.com.