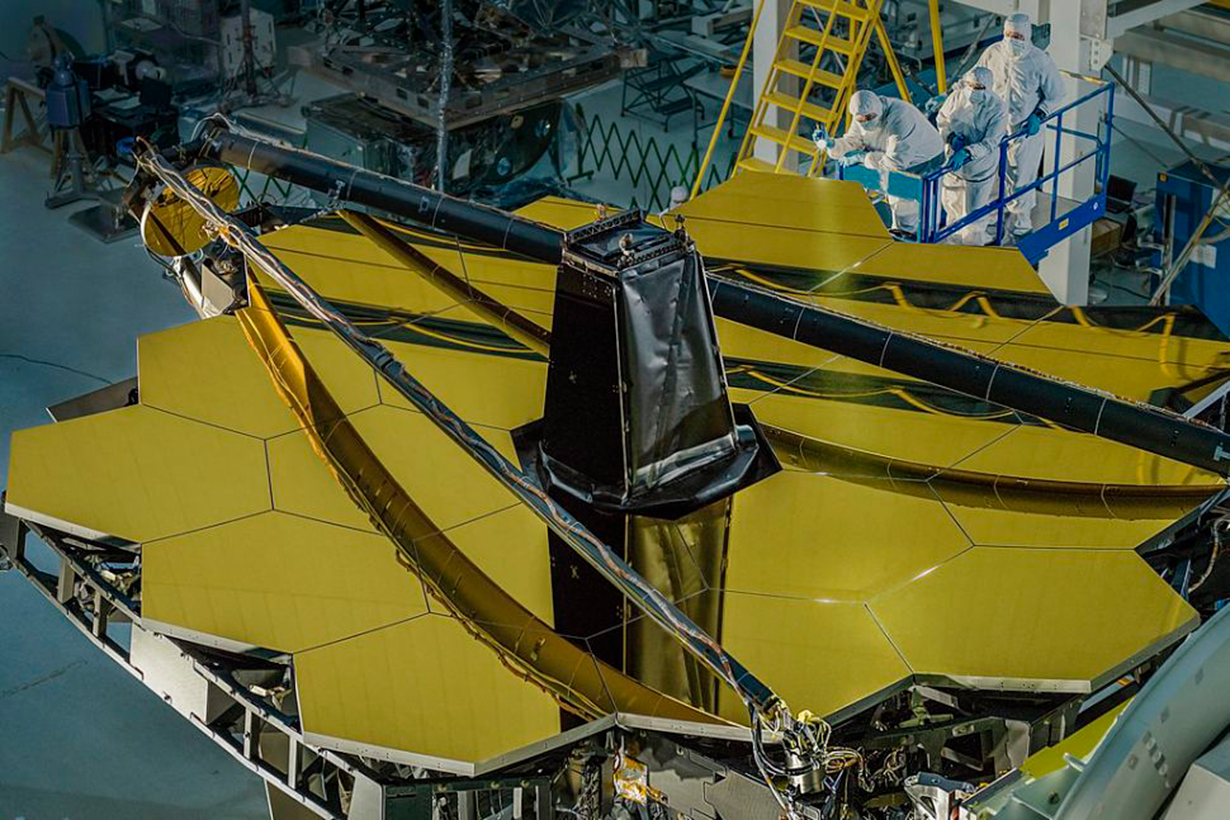 Have you seen images online of a giant, golden honeycomb poised to launch into space? That’s the iconic mirror that will allow the James Webb Space Telescope to study corners of the cosmos never before seen.

The James Webb Space Telescope, a joint collaboration between NASA, the European Space Agency and the Canadian Space Agency, is set to be the most powerful space telescope ever. The secret to its impressive observation powers? An enormous, golden mirror. The mirror is made up of 18 smaller mirrors that together will allow mission teams to use the scope to measure light from extremely distant galaxies, billions of light-years away.

“What we really need is for all those 18 mirrors to act as though they’re a single monolith,” Lee Feinberg, the Optical Telescope Element Manager for Webb, told Space.com at a news conference in May of this year.

Webb is set to launch to space on Dec. 22 from the Guiana Space Center, or Europe’s Spaceport, in Korou, French Guiana.

This makes Webb’s primary mirror significantly larger than that of the Hubble Space Telescope, which has a mirror that measures 7.8 feet (2.4 meters) across. 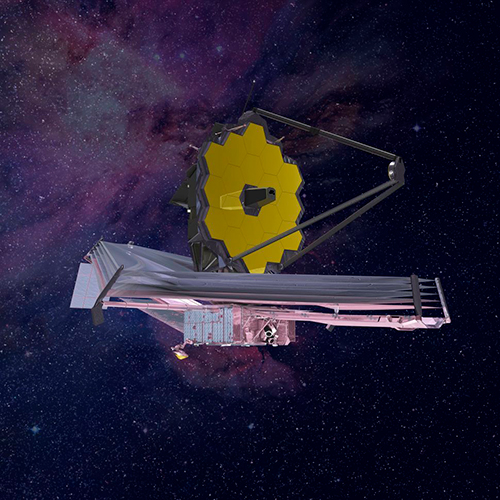 The James Webb Space Telescope will rest in space at Lagrange Point 2, a spot directly behind Earth from the sun’s perspective. There, the instrument will make powerful observations of far-off celestial bodies; the telescope’s infrared view will be able to penetrate interstellar dust. (Image credit: Northrop Grumman)

The space telescope’s signature honeycomb mirror segments are shaped as such because the pieces can fit together in a way that makes it possible for the primary mirror, made up of all of the pieces, to be a roughly circular shape, according to a NASA statement.

“If the segments were circular, there would be gaps between them,” the statement reads, adding that “a roughly circular overall mirror shape is desired because that focuses the light into the most compact region on the detectors. [An] oval mirror, for example, would give images that are elongated in one direction. A square mirror would send a lot of the light out of the central region.”

In addition to its shape that helps it to pick up light from very far away, Webb’s mirror operates with the help of what are called actuators. Actuators are tiny mechanical motors that help the mirror to focus on far-off objects.

There are six actuators on the back of each mirror piece that can move each piece of the mirror in minuscule amounts very slowly, allowing the mission team to fine-tune Webb’s view.

“These actuators are actually a pretty amazing piece of engineering in the sense that they can move long strokes, called core stage, but they also have a fine stage which can move extremely precise, fractional wavelengths of light,” Feinberg said.

Why is it gold? 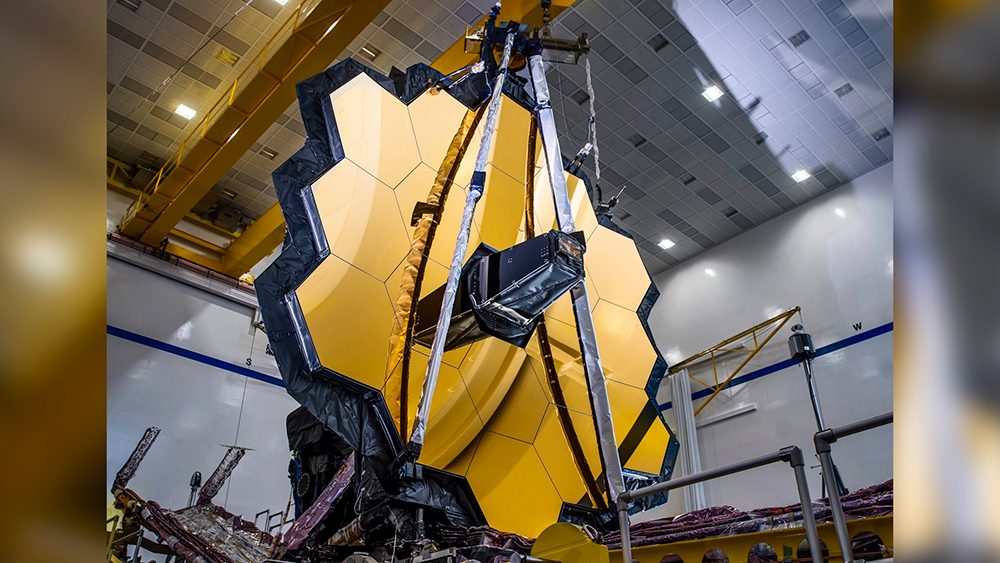 Aside from its hexagonal shape and enormous size, Webb’s most distinctive feature is the shiny, bright gold color of its mirror.

It has such a striking appearance that NASA even held an art challenge open to public submissions of art inspired by the space telescope.

So, “why gold?” Feinberg said. For one, it is extremely reflective (which is readily apparent in its brilliant appearance). “It has this amazing reflectivity … gold actually has the highest reflectivity over a very wide wavelength band.”

“The reason you build such a large telescope is to catch every individual photon,” he added. “So you also want the reflectivity of each of these coatings to be extremely high so we don’t lose photons along the way.”

Webb’s mirrors are said to be 98% reflective — meaning they reflect 98% of incoming photons — which is about as reflective as it comes.

Feinberg added that “it’s also a protective gold that has an overcoat … it’s a very rugged coating.”

Now, while Webb’s mirror segments are coated in gold, they are not made of solid gold. They are actually constructed from beryllium, a strong but lightweight metal. Each mirror piece weighs about 46 pounds (20 kilograms) on Earth. In addition to being extremely durable while comparably lightweight, beryllium can also hold its shape at the extreme cold temperatures that Webb will need to operate at, according to the NASA statement. 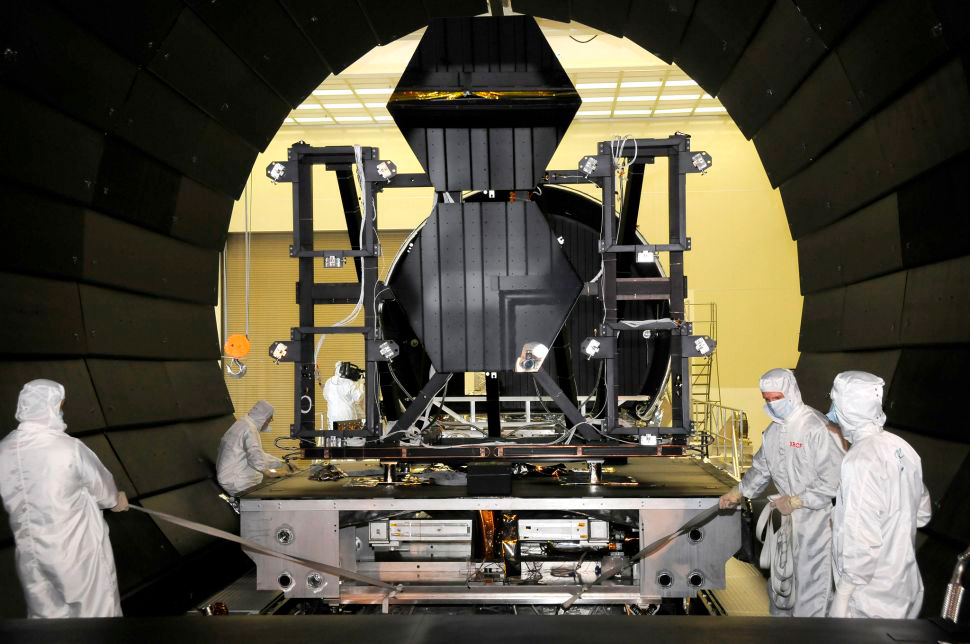 Webb has been over 20 years in the making since development first began on the scope in 1996.

To develop, build and test Webb’s mirrors, it took “a product integrity team that was made up of optical experts from all around the world,” Bill Ochs, the James Webb Space Telescope project manager, said during the same news conference.

Ochs shared that they tested the hardware “at [NASA’s] Johnson Space Center in their chamber that was built back in the Apollo era that was modified to become the largest cryogenic chamber in the world.”

In this cryogenic chamber, which is a facility that creates an extremely cold environment, “we were able to deploy the entire telescope,” Ochs said.

To peer out into the farthest reaches of the universe and spot its stars and galaxies, Webb observes in infrared light. However, since infrared light is essentially heat, if Webb were too warm it wouldn’t be able to detect infrared light past the glow of its own mirror.

In fact, Webb’s mirrors need to be at about minus 364 degrees Fahrenheit (minus 220 degrees Celsius) to work as intended. To keep it this cold, the scope will be sent into deep space where it will deploy sunshields to shade its mirrors and other instruments from any lingering warmth from the sun.

So, with this testing, the team was able to ensure that Webb’s precious mirror pieces could operate in such extreme and frigid conditions.

This article was written by Chelsea Gohd from Space and was legally licensed through the Industry Dive publisher network. Please direct all licensing questions to legal@industrydive.com.