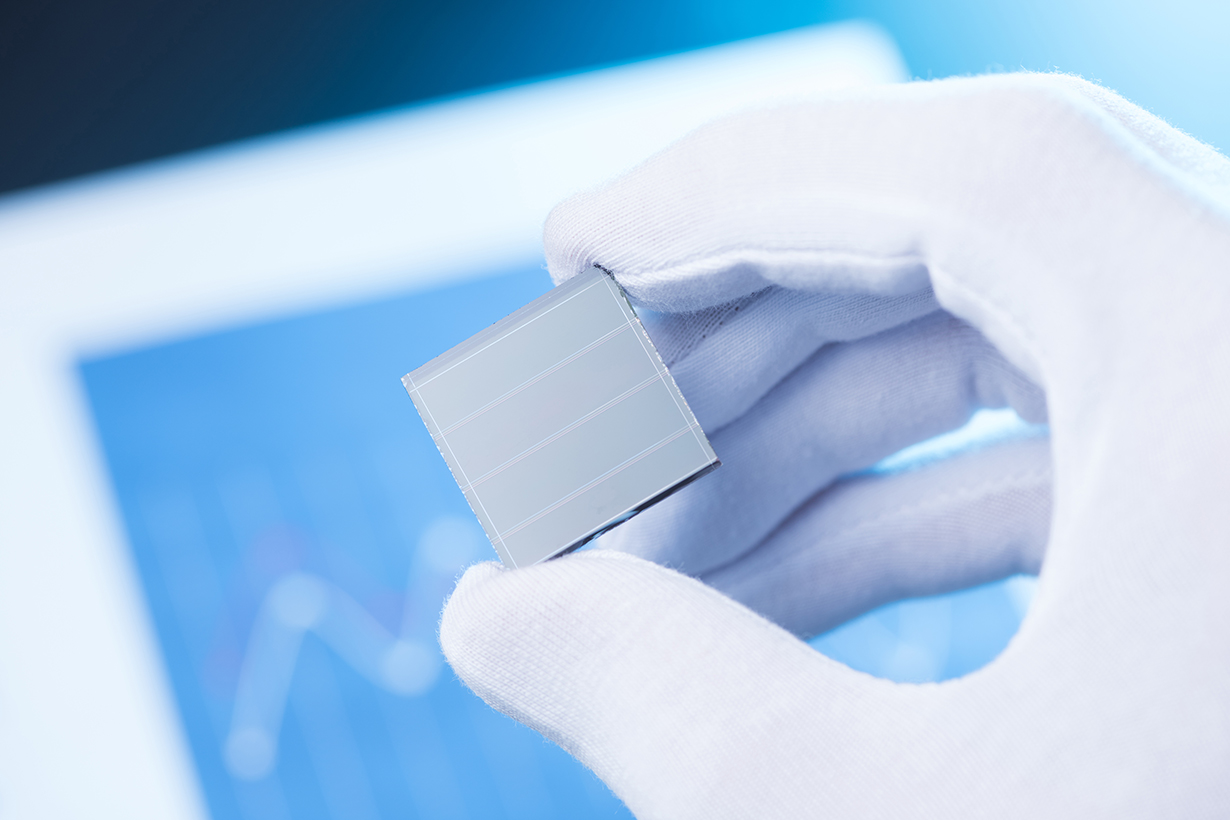 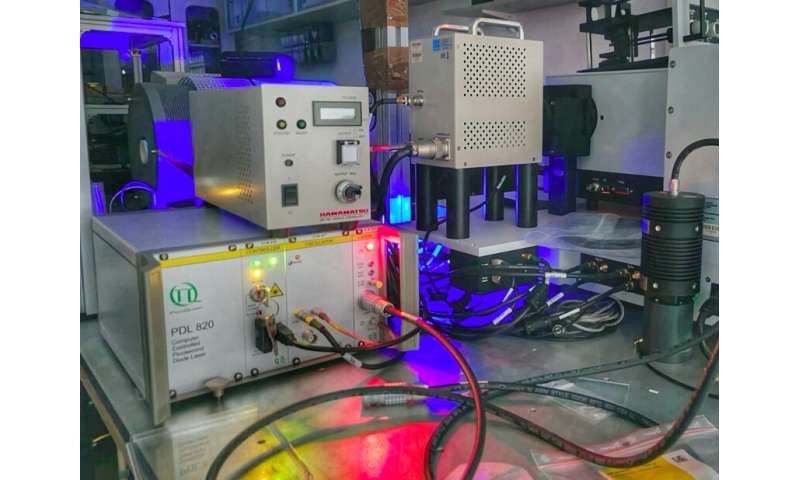 Organic photovoltaics are a third-generation solar cell technology made of electron donor and electron acceptor materials instead of conventional semiconductor p-n junctions. The performance of this alternative solar cell technology has improved significantly over the past few years and it is now comparable to that of classical inorganic solar cells, both in terms of charge carrier yields (i.e., electrical current generation) and solar spectrum matching.

The only feature of organic photovoltaics that still lags behind traditional solar cells is its achievable voltage (Voc, which stands for open circuit voltage). As electrical power is the product of voltage and current, however, the poor Voc of organic solar cells currently prevents their successful commercialization.

Researchers at the Institute of Materials for Electronics and Energy Technology (i-MEET) in Germany and the National Hellenic Research Foundation (NHRF) in Greece have been investigating specific features of materials used to build organic photovoltaics that could enable greater efficiencies and achievable voltages. Their paper, published in Nature Energy, shows that materials with long exciton lifetimes could be particularly promising for the creation of efficient organic solar cells.

Andrej Classen, one of the researchers on the team, who recently received a Ph.D. from the i-MEET institute, carried out a few studies exploring the physics behind the low Voc of organic photovoltaics. In contrast with classical photovoltaics, organic materials are known to form bound charges (i.e., excitons), which require a driving force to be converted into free charges and consequently generate electricity.

The conservation of energy law, however, implies that while a high driving force facilitates this conversion, it also leads to a lower Voc. Classen thus started wondering how he could reduce this driving force to minimize Voc losses and still enable the conversion of excitons to electricity. 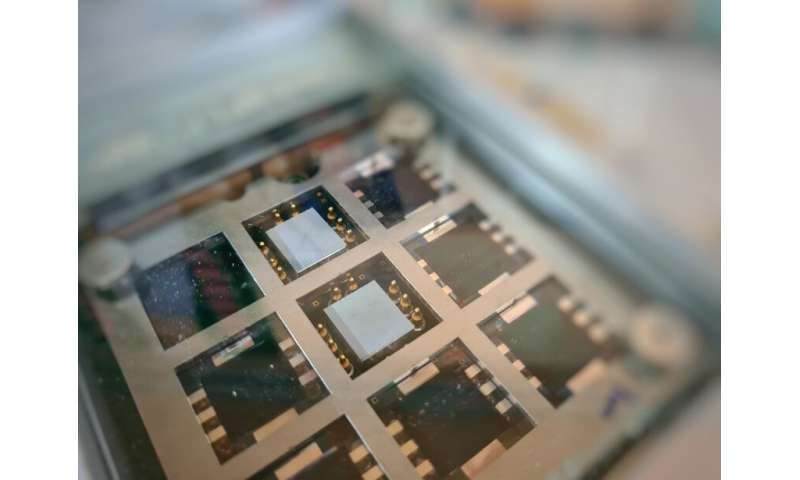 A sample holder for measuring the electrical performance of the devices under controlled conditions. Credit: Classen et al.

He also investigated whether there is a specific limit under which the conversion is not possible or whether this limit depends on the properties of specific materials. His hope was that by better understanding how the size of a driving force actually impacts the qualities of different materials, he could then design a material with a driving force that resulted in a higher Voc and also capable of efficiently converting excitons into electricity.

“As Andrej investigated how voltage can be maximized using materials with minimal energetic offsets, he encountered severe current losses in common state-of-the-art materials,” Larry Lüer, an expert in time-resolved spectroscopy who was involved in the study, told TechXplore. “Only a specific property of a novel small molecule acceptor, the high radiative lifetime of Y6, allowed it to maintain high current. This expands the current research focus, as in state-of-the-art materials with high energetic offsets a high driving force leads to ultrafast charge generation where the radiative lifetime is not relevant and is thus often neglected.”

Classen and Lüer started working together to describe and simulate charge generation in the limiting case of zero driving force. This in turn allowed them to identify a new set of rules to design materials for organic solar cells.

The researchers were led by Christoph Brabec, director of the i-MEET institute and professor at the University of Erlangen-Nuremberg, who is renowned for his studies focusing on high definition in the formulation of new devices. The team also collaborated with skilled organic chemists worldwide, who helped them in their examination and design of photovoltaic materials.

Christos L. Chochos, an organic synthesis expert working at the National Hellenic Science Foundation, synthesized four different donor polymers, which were similar in structure and yet differed in their highest occupied molecular orbital (HOMO) levels (by approximately 60 meV each). 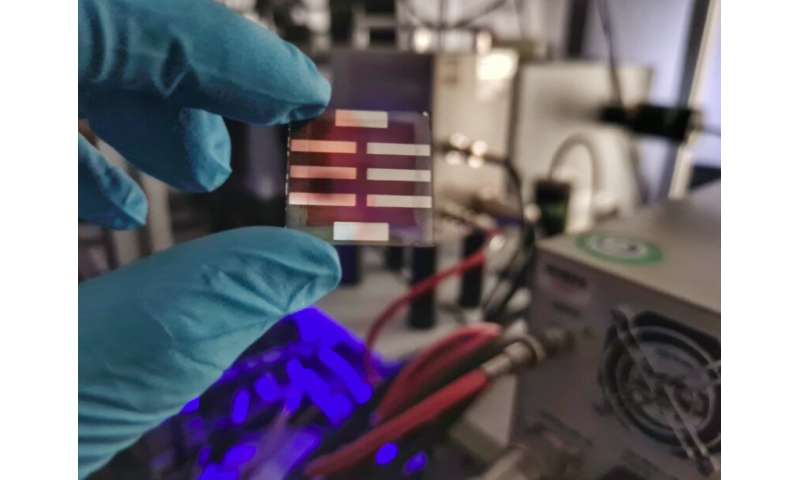 Image 3: A typical organic photovoltaic device. One can see the six metallic top electrodes. The bottom electrode is transparent and can be connected at the metallic side bars. Credit: Classen et al.

“Andrej blended each of these donor polymers with 5 different acceptors, 4 of them from the modern class of ‘non-fullerene acceptors’ (NFA) so that he could formulate 20 solar cells under exactly the same preparation conditions,” Thomas Heumüller, device technology expert who is part of the group led by Christoph Brabec, told Tech Xplore. “He then applied state-of-the-art methods to determine the external quantum efficiencies, exciton lifetimes and the Voc losses for each solar cell. The high sample definition available at i-MEET, together with the equidistant energy spacing of the donor polymers, allowed him to unambiguously identify mechanisms behind Voc losses, due to their known functional dependence on energy.”

The findings gathered by Classen, Lüer, Brabec, Heumüller, Chochos and their colleagues could pave the way toward the development of organic solar cells that are more efficient and thus can be successfully introduced in real-world settings. Moreover, the researchers showed that Voc losses are governed by what is known as a “Boltzmann equilibrium” between electron donors and acceptors.

“Recently, many scientists have focused on the CT state, trying to improve its absorber qualities (the ‘hybridization’ concept) and avoiding nonradiative losses,” Lüer said. “However, Andrej has shown that in the limiting case of zero driving force, Voc losses are dominated by the exciton radiative and nonradiative decay channels, and not those of the CT state. It is therefore of utmost importance to develop highly luminescent acceptors with the right energy levels for efficient exciton splitting.”

The study could eventually enable the design and development of organic photovoltaics with efficiencies that exceed 20%, which would considerably facilitate their commercialization. To move toward the realization of these photovoltaics, however, future studies will first need to explore the interplay between excitons and CT properties further, in light of the Boltzmann equilibrium unveiled in this research.

“Besides the hybridization concept, there are also morphological factors that influence CT energy, e.g. by causing quadrupolar moments,” Heumüller said. “Lüer and I are currently working on improving our understanding of CT interfacial states. Currently only a handful of ‘hero’ materials reached promising efficiencies. We hope to broaden the range of potential candidate materials, so that organic photovoltaics can fulfill one of their main promises, namely their versatility.”