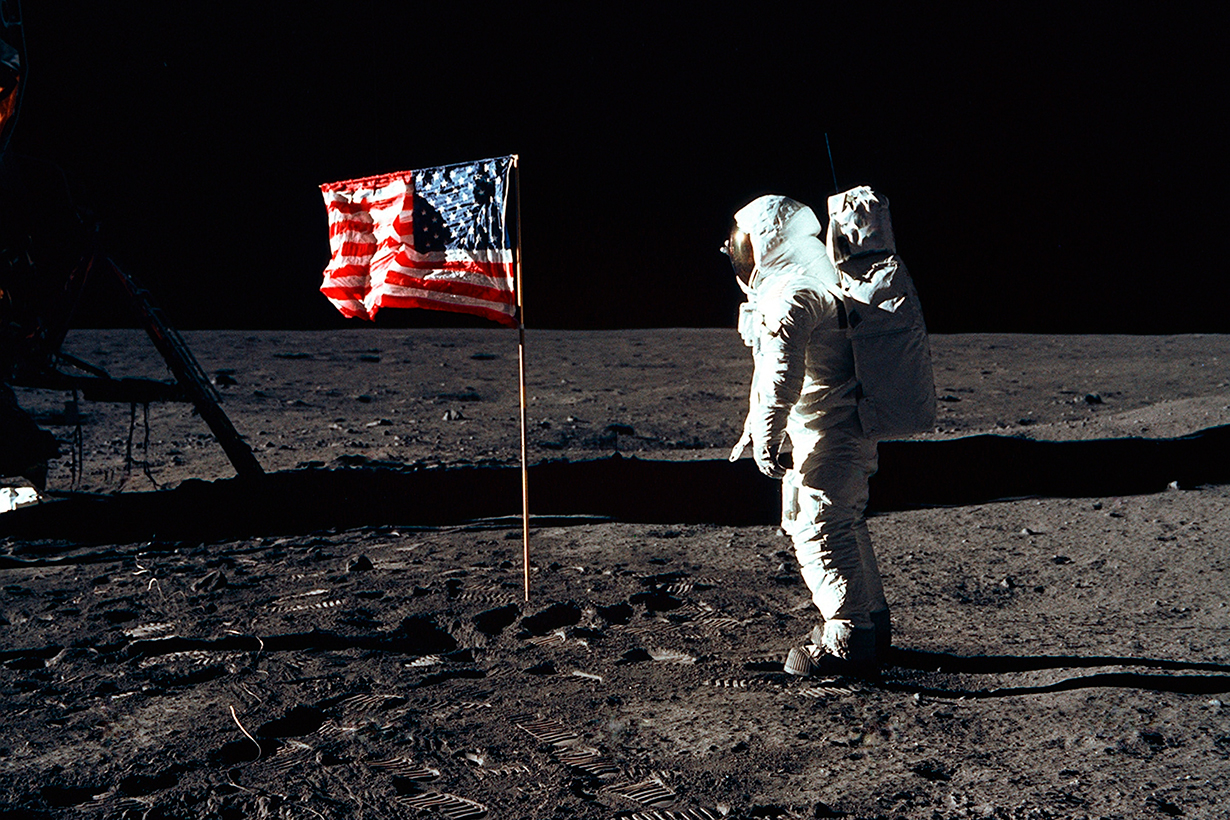 At the end of July. 2021, the second richest man in the world, Amazon’s Jeff Bezos, plans to blast himself into space, a project that has prompted a satirical global petition asking him to stay there. If the history of human space exploration ended at that moment, with the phallic self-launch of a narcissistic tax avoider, it would be a bathetic endpiece to a remarkable story that began with Nazi weaponry and has encompassed arguably the greatest achievement to date of human civilisation.

It is nearly 50 years since people last walked on the surface of the moon – the moon! – in an age with no internet or smartphones, driven there in rattling tin cans at unimaginable speeds by huge controlled explosions. Boosters of the modern app economy love to claim that right now the pace of technological change is the fastest it has ever been, but they are somehow forgetting the period between 1957, when the USSR put the first artificial satellite, Sputnik 1, into orbit, and 1969, when three men flew to the moon and two of them descended in a separate spacecraft, walked around collecting rocks, and then blasted off again, docking with the original spacecraft, before flying back to Earth and splashing down safely in the ocean.

The vehicle that had pushed them laboriously out of Earth’s gravity well was the Saturn V, still the largest rocket ever built, a 36-storey-high behemoth designed under the guidance of Nazi rocket scientist Wernher von Braun. The inventor of the V2 rocket, which terrorised London from late 1944, Von Braun surrendered to the Americans at the end of the war, was gratefully transported to safety in the US and put in charge of designing rockets for ballistic missiles with which to nuke the Soviets.

But Von Braun still dreamed of less unpleasant ways to use his rocket science. Between 1952 and 1954 he wrote a series of articles for Collier’s Magazine under the rubric “Man Will Conquer Space Soon!” Then came Sputnik and, in 1961, the first human being in space: Yuri Gagarin. The US military was alarmed. A month later, President Kennedy announced that the Americans would put someone on the moon by the end of the decade, and the space race was on.

It is this era that forms the narrative core of Australian space historian Colin Burgess’s book, with each and every Nasa mission in the Mercury, Gemini, and Apollo programmes described in detail loving enough to thrill space nerds of all ages. But he also pays due homage to the remarkable achievements of the Soviets, who for much of the space race’s duration were still winning it, until suddenly they weren’t. This he attributes to the untimely death in 1966 of the Russian genius Sergei Korolev, an engineer who had survived two years in the Gulag after one of Stalin’s purges, worked on rockets during the war, and rose to become chief designer of the Soviet space programme.

It was Korolev who, in the mid-1950s, began firing dogs into the upper reaches of the atmosphere without asking them, to check the bio-effects of very high-altitude flight. In November 1957, just a month after Sputnik 1, Korolev launched the much bigger Sputnik 2, final home of the plucky cosmodog Laika, the planet’s first life-form to experience spaceflight, sent up there with bio-sensors to beam back data but no plans to bring her home. Dog lovers the world over protested at the cruelty of leaving her up there to circle the planet until her air ran out. The well-connected Burgess, though, has it on the authority of two Russian sources that Laika probably expired of heat exhaustion only a few hours into the flight, which might have been a relative mercy.

While the USSR were firing the first object, first animal, and then first human into space – they got the first woman into space too, Valentina Tereshkova in 1963 – the Americans were racing to catch up, eventually boosting a bunch of monkeys into the high atmosphere. In 1958 Nasa was formed, and the term “astronaut” (Greek for “star sailor”) officially adopted, the first American astronaut being a squirrel monkey named Miss Baker, who completed a short ballistic flight into space in 1959.

Burgess tells the subsequent tales of crewed spaceflight on both sides of the iron curtain with great verve, and a suspenseful narration of unheralded near-disasters. Gagarin’s spacecraft, for instance, only just avoided burning up on re-entry, as did John Glenn’s Friendship 7 craft on an early Mercury mission. There’s a nail-biting story of one cosmonaut whose suit ballooned and nearly prevented him from getting back through the airlock. On the Apollo 10 mission, the lunar lander nearly crashed because its radar locked on to the actual moon instead of the command module it was meant to rendezvous with. And Apollo 11 only landed safely because crack pilot Neil Armstrong overrode the automatic systems that were trying to set down on dangerous rocks and flew to a better landing zone with seconds of fuel left.

There are, too, sober analyses of the actual disasters, including the fatal fire in the command capsule of the first Apollo mission during a test on the ground, later found to be partly due to cost-cutting by a contractor (plus ça change), and the loss of the space shuttle Challenger in 1986, owing to a frozen O-ring in a rocket booster. (“It’s silly no? / When a rocket-ship explodes / And everybody still wants to fly” sang Prince a year later.)

Nasa now plans, though, to put people back on the moon by the middle of this decade, which rather prompts the question: why did moon-going stop nearly half a century ago? The answer seems to be, astonishingly in hindsight, that we just got bored of it. “The sight of astronauts gleefully bouncing around in one-sixth gravity had become tiresome for many,” Burgess notes, “and public support for the space agency’s lunar missions had plummeted.”

So what has changed? Well, China landed a robot on the moon last year, and more recently announced plans to build a joint moon base with Russia. So some of Donald Trump’s “Space Force” might want to be there jockeying for position too. But more generally space seems cool again, partly thanks to the antics of billionaire entrepreneur Elon Musk, of Tesla and SpaceX fame, who builds rockets for Nasa and used one of them to blast a red Tesla into orbit. (In the driver’s seat is a mannequin called “Starman”, in homage to the David Bowie song.) Blinking in Musk’s authentic rocket exhaust are the minnows with vanity space companies, such as Bezos’s Blue Origin and Richard Branson’s Virgin Galactic, which is most notable for the fact that it has been promising its first tourist flights into space are just around the corner for more than a decade.

But does space exploration actually matter as something more than a dick-waving contest for plutocrats? “Space exploration is a human imperative,” Burgess writes, and “travelling further afield in space is our undeniable destiny,” but he might have offered a more full-throated defence of it. Some argue that space exploration is a waste of money while we still have problems to fix on our own planet, but that has never been an either/or proposition, just as it was not a binary choice for the UK between staying in the EU or spending more money on the NHS. The pure-science justification alone is strong, taking into account the cosmological discoveries that flowed from the Hubble telescope, and will do so from its successor, the James Webb space telescope, to be launched later this year.

But possibly the best reason is that, even if we decide to act as better stewards of the Earth, it could be rendered uninhabitable through no fault of our own. Perhaps a large asteroid strike, or a gamma-ray burst from a nearby star collapsing into a black hole, which would destroy the atmosphere. In that case, it might be nice to have a spare planet, and we might feel grateful to the pioneering space-sailors who helped make evacuation a possibility.

• The Greatest Adventure: A History of Human Space Exploration is published by Reaktion. To support the Guardian and the Observer buy a copy at guardianbookshop.com. Delivery charges may apply.

This article was written by Steven Poole from The Guardian and was legally licensed through the Industry Dive publisher network. Please direct all licensing questions to legal@industrydive.com.