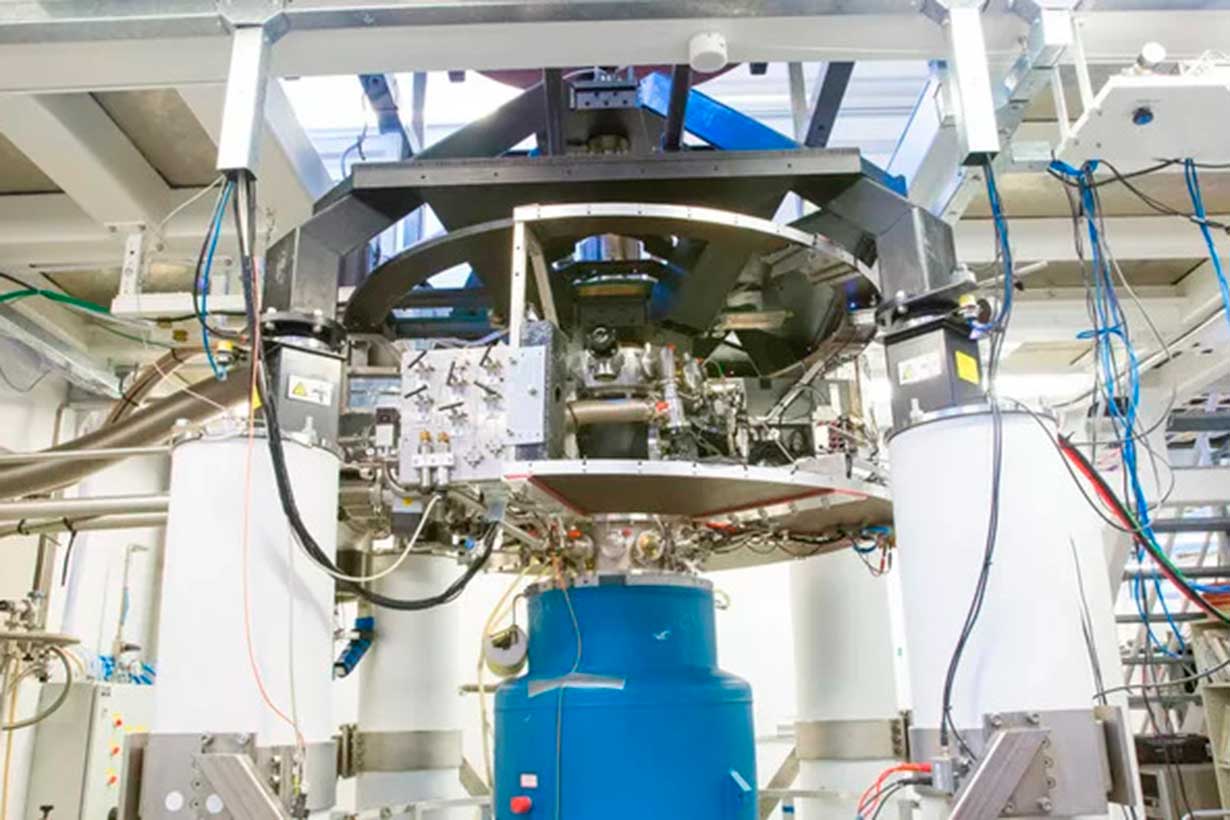 The connecting of two “time crystals” in a superfluid of helium-3 barely one-ten-thousandth of a degree above absolute zero could be a huge step toward a new kind of quantum computer.

Time crystals are bizarre structures of atoms, the existence of which was only predicted as recently as 2012, with experimental proof following a few years later. In a normal crystal, such as diamond or salt, the atoms are arranged in a regularly repeating spatial pattern — a lattice or similar framework. And like most materials, when the atoms are in their ground state — their lowest possible energy level — they stop jiggling.

Time crystals, on the other hand, consist of atoms that repeat in time rather than in space, oscillating back and forth, or spinning, even in their ground state. They can maintain this motion perpetually, without requiring an input of energy or losing energy in the process.

In doing so, these time crystals can defy a concept known as entropy. The second law of thermodynamics describes entropy as how any system grows more disordered over time. As an example, consider the orbits of the planets around the sun. For simplicity, we imagine them moving in clockwork order, always arriving back at the same place at the same time in their respective orbits. In reality, however, things are messy: The gravity of the other planets, or passing stars, can tug and pull on the planets, making subtle changes to their orbits.

Hence, the orbits of the planets are inherently chaotic. A small change to one can potentially have big repercussions for all of them. The system becomes disordered over time — the entropy of the system increases.

Time crystals can negate the effects of entropy because of a quantum-mechanical principle known as “many object localization.” If a force is felt by one atom in the time crystal, it affects only that atom. Therefore, the change is considered localized rather than global (throughout the system). As a result, the system does not become chaotic and allows the repeating oscillations to continue, theoretically, in perpetuity.

“Everyone knows that perpetual motion machines are impossible,” Samuli Autti, a research fellow and lecturer in physics at Lancaster University in the United Kingdom, said in a statement. “However, in quantum physics, perpetual motion is okay as long as we keep our eyes closed.”

Autti, who led the research, is referring to the Heisenberg uncertainty principle, which alludes to how, when a quantum system is observed and measured, its quantum wave function collapses. Because of their quantum mechanical nature, time crystals can operate at 100% efficiency only when fully isolated from their environment. This requirement limits the amount of time they can be observed until they completely break down as a result of wave-function collapse.

However, Autti’s team succeeded in connecting two time crystals by cooling a quantity of helium-3,  an isotope of helium. Helium-3 is special because, when cooled to a fraction above absolute zero (minus 459.67 degrees Fahrenheit, or minus 273 degrees Celsius), the isotope becomes a superfluid, which not many materials can do. In a superfluid, there is zero viscosity, so no kinetic energy is lost through friction, thus allowing motions — such as those of the atoms in a time crystal — to continue indefinitely.

Autti’s team, working at Aalto University in Finland, then manipulated the helium-3 atoms to create two time crystals that interacted with each other. Furthermore, they observed this time-crystal pairing for a record amount of time, about 1,000 seconds (nearly 17 minutes), equating to billions of periods of oscillating or spinning motion of the atoms, before the time crystals’ wave function decayed.

“It turns out, putting two of them together works beautifully,” Autti said.

Related stories:
— 10 mind-boggling things you should know about quantum physics
— Do we live in a quantum world?
— World’s 1st multinode quantum network is a breakthrough for the quantum internet

The findings create a promising line of research for developing a fully functional quantum computer. Whereas the bits of a normal computer are binary — 1s or 0s, on or off — the processing rate of quantum computers is much faster because they utilize ‘qubits,’ which can be 1 and 0, on and off at the same time. One way to build a quantum computer would be to link myriad time crystals, each one designed to act as a qubit. Therefore, this first experiment to link two time crystals has created the basic building block of a quantum computer.

Previous experiments have already shown that some time crystals can operate at room temperature, rather than needing to be cooled to nearly absolute zero, making their construction even easier. The next task, Autti’s team said, is to demonstrate that logic gate operations, which are functions that allow a computer to process information, can operate between two or more time crystals.

The research was published June 2 in the journal Nature Communications.

This article was written by Keith Cooper from Space and was legally licensed through the Industry Dive Content Marketplace. Please direct all licensing questions to legal@industrydive.com.