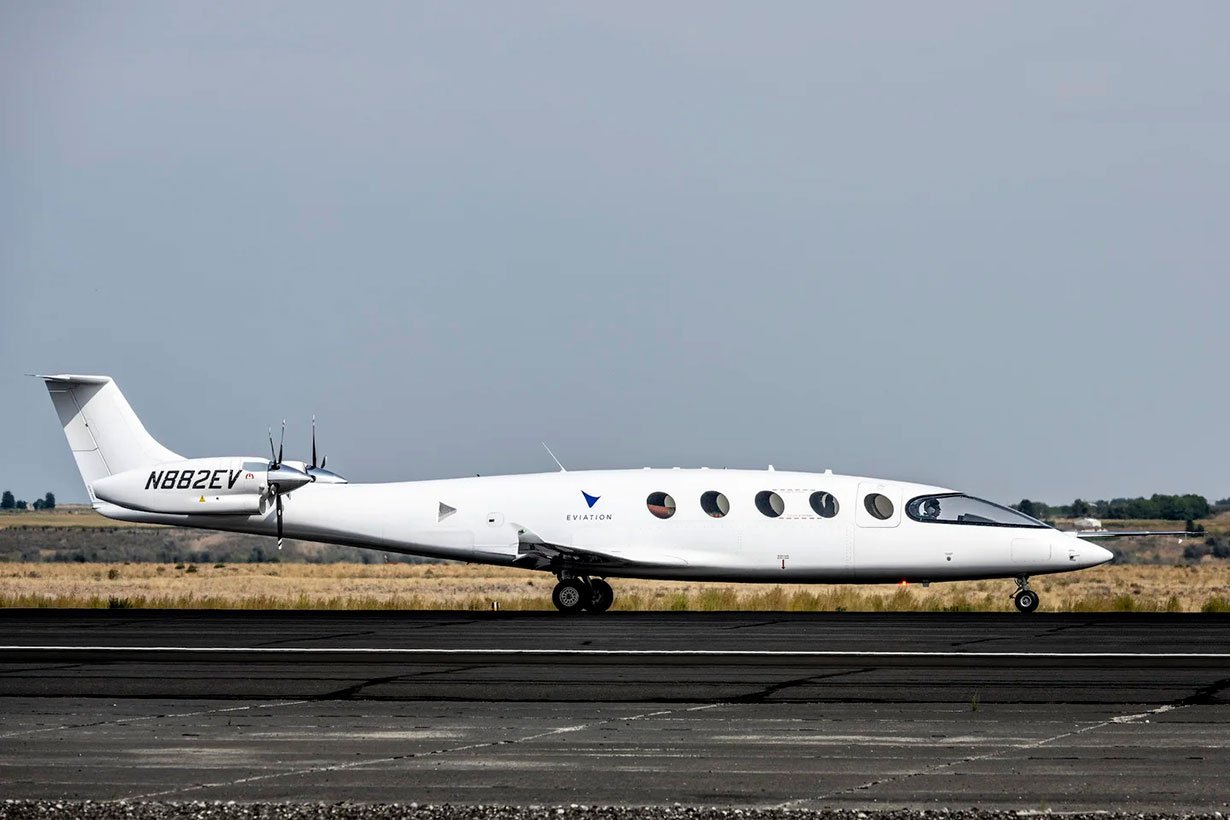 On September 18, an all-electric aircraft sped down a runway in Washington state, its nose wheel lifting off the ground. It didn’t take off, though, by intention: The test was a predecessor to an actual first flight, which the company says is “imminent.”

The 57-foot-long aircraft, which its makers call Alice, is just a prototype, although a pretty slick one at that. Someday, if a production version enters service with an airline like Cape Air, the goal will be for it to be able to carry nine passengers and their bags for flights lasting about an hour or two—think distances of about 170 to 230 miles. Up front in the commuter plane will be space for two pilots, although it will be certified to be flown by just one person.

Other companies working on electric flight, which is one way that the industry hopes to become less carbon-intensive, are developing flying machines that don’t look like traditional aircraft. An air taxi by Joby Aviation, for example, is capable of taking off and landing vertically, and thus has a different design. But Alice, made by a company called Eviation, looks a lot more like a regular plane. Here’s how it works right now.

Batteries in the belly

The plane’s motors need battery power to give them the juice they need. Not surprisingly, the batteries that do that are in the bottom of the plane, where the girth of the aircraft is also a little wider.

Batteries are heavy, and they don’t have the same energy density as regular fuel does, which sets a major limit for electric flight. The batteries on this prototype weigh a total of 8,000 pounds, and these lithium-ion cells are cylindrical, which is the same shape that some automakers, like Tesla and Rivian, use. For luggage, the cargo compartment is behind the passenger cabin. 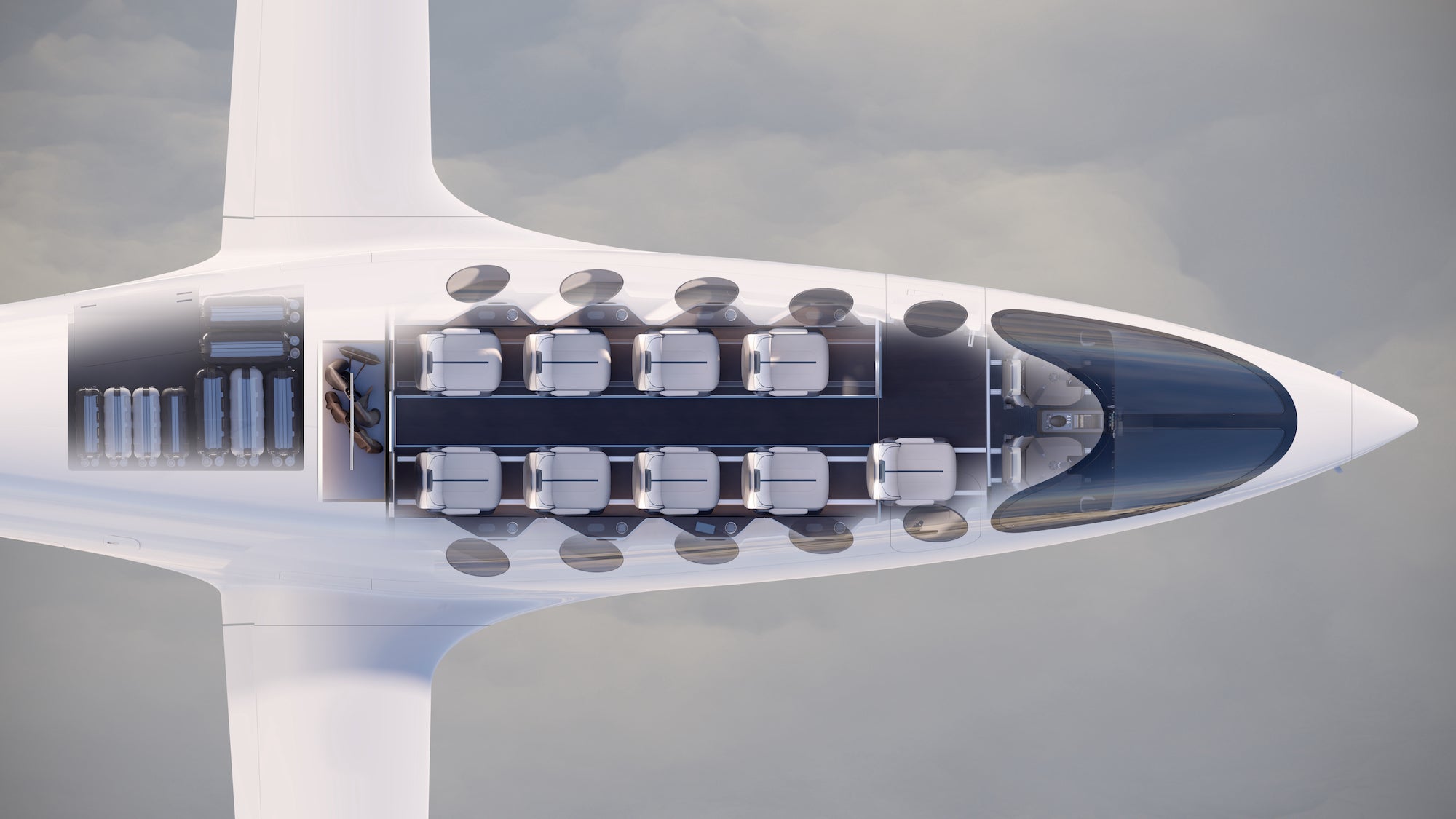 A rendering of the cabin layout. Image Credit: Eviation

Other attributes of the aircraft’s design are all about making it be able to accomplish its intended mission—commuter flights over relatively short distances—while harnessing battery power. “Building an electric aircraft is a war on weight, and it’s a war on drag,” notes Gregory Davis, the company’s CEO and president. “Our challenges are to get the best possible lift-over-drag ratio.”

The aircraft has long, narrow wings, which don’t sweep backwards; wings that are lengthy and skinny are referred to as possessing a high aspect ratio. “We need to have the most efficient wing that we can,” he says. (For a point of comparison, take a look at the wings on an aircraft like an F-16, which is designed for performance and supersonic speeds, as opposed to efficiency.)

As for keeping the weight to a minimum where they can, the plane is made mostly out of carbon composite material, Davis says. The aircraft is also what is known as fly-by-wire, which Davis says also makes it lighter than it otherwise would have been. A non-fly-by-wire aircraft employs mechanical connections, like metal cables, to translate what the pilot does at the controls to the actual surfaces on the outside of the plane. A fly-by-wire aircraft uses computer signals to do the same, removing those cables or other physical connectors.

Props in the back

At the rear of the aircraft are two electric motors that spin two propellers. Those motors are made by a company called magniX; an airline, Harbour Air, has also used a magniX motor to power a converted electric seaplane.

In the case of the Alice aircraft, the power units in the back “can produce 650 kilowatts of power per side, so 1.3 megawatts of power for the aircraft during takeoff, which is great,” Davis says.

Right now, there’s an understandable gap between where the company eventually expects to arrive with the range of its production-model aircraft and the prototype, which will soon be making its first flight. “The batteries aren’t there yet,” he says. “Battery technology is, perhaps unsurprisingly, the biggest challenge in electric aviation.” The hope is that as development of the Alice aircraft continues, the industry—electric aircraft, electric ground vehicles—keeps innovating.

He refers to this battery situation as “a challenge for the entire industry.” The prototype aircraft, he says, is good “for demonstrating that the technology works together.”

To be sure, Eviation and its Alice aircraft are not the only ones working in this new frontier. Companies like Beta Technologies and Joby Aviation are flying electric air taxis that are designed to take off and land like helicopters, although in recent flights with Air Force pilots at the controls, or a multi-leg journey to Arkansas, Beta’s demonstrator took off and landed conventionally. Others include Archer and Wisk. Finally, Kittyhawk was working on a one-person plane known as Heaviside, but just announced on September 21 that they would be shutting down the company.

And in related news, a company called Heart Aerospace is working on a hybrid-electric aircraft, the ES-30. The Air Current aviation website has more on why Heart recently pivoted away from an all-electric smaller craft to a larger, 30-seat machine that also has turbo-generators on board.

For Eviation’s Davis, he compares their current stage of development to NASA’s Mercury program, which saw the first American in a sub-orbital flight in 1961, eight years before the moon landing of Apollo 11. “What we’re doing here with Alice is like Alan Shepard going into space on a Redstone [rocket]—it’s showing that we can do it,” he says. “Where we’re headed in terms of making electric aviation part of our world—something that our children will fly on and we won’t think twice about—that’s the destination here. We need to show that we can do it.”

Watch the high-speed taxi test, below.

This article was written by Rob Verger from Popular Science and was legally licensed through the Industry Dive Content Marketplace. Please direct all licensing questions to legal@industrydive.com. 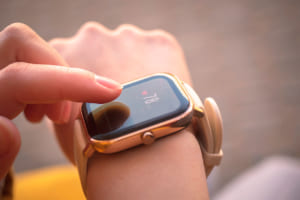