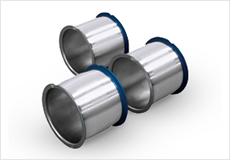 With just a small capital investment, material costs can be reduced by 80%.
Silver bonding wire exhibits excellent durability, conductivity and speed of production.

State-of-the-art equipment continues to evolve-the challenge is to maintain high quality in the face of increasing demand.

E Inc., a chipmaker that manufactures semiconductor packages used for mobile phones and LCD TVs, invested in capital equipment and hired aggressively in order to maintain its high performance quality. E Inc.’s attitude lead to a result earned hight trust of its customers. However, the company was beginning to confront an enormous cost burden. Reducing production costs was absolutely essential to withstand future competition, the threat of which was giving Mr. O, Head of the Production Technology Division, headaches.

Though introduction of copper bonding wires was considered, they were unable to meet requirements…

The Production Technology Division held weekly division meetings and considered solutions based on information contributed by each division member. As a result of such discussions, copper bonding wires emerged as the leading candidate. The opinion was advanced that prices were strikingly lower for copper wires than gold wires and that thus the gold wires should be replaced if copper wires could meet the performance requirements. However, E Inc. discovered an issue that prevented the company from proceeding with copper wires…

First, use of copper bonding wires would require special bonding equipment; the equipment used for gold wires could not be used as is, necessitating several hundreds of millions of yen in capital investment even for an initial phase of introduction. Such equipment also requires a mixed gas made from hydrogen and nitrogen, which presents difficulties in ensuring safety as well as keeping operating costs low. Moreover, copper wires would reduce production speed by 30% compared to that for gold wires. Also, the material for copper wires was too hard, which caused cracks to result when they were connected to bonding pads (the connection terminals on semiconductor chips). These and many other problems continued to pile up.

Introducing copper bonding equipment with only a small capital investment becomes possible! Production speed equivalent to that of gold is maintained while material costs are significantly reduced!

In addition to gathering information from the Internet and the weekly division meetings, Mr. O, Head of the Production Technology Division at E Inc., visited several exhibitions. At one exhibition, he was very much attracted to the sales pitch of Tanaka Precious Metals Group: “With our skills and security backed by our track record of maintaining top market share globally in bonding wire manufacturing, we will suggest the best material for the challenges facing you.” 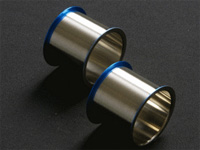 Later, a Tanaka Precious Metals Group sales representative visited E Inc. Based on the information obtained from an interview, the representative recommended silver bonding wires to E Inc.
“Silver bonding wires exhibit equivalent or higher performance compared to gold wires in terms of durability, conductivity, and production speed. They also enable material costs to be reduced significantly. At the same, existing equipment for gold wires can be used for silver wires by making only a slight modification to enable it to spray nitrogen gas,” explained the Tanaka sales representative. The representative proceeded to note that silver wires are as soft as gold wires and can be adhered to bonding pads (the connection terminals on semiconductor chips) without causing any cracks to develop.

Successfully cut material costs by 80% while maintaining high performance and quality!
As a result after repeated studies, the project team at E Inc. unanimously agreed to adopt Tanaka’s silver bonding wires.
Mr. O explained: “We felt safe in using silver wires backed by Tanaka’s high level of skill. The sales representative from Tanaka was very helpful as we considered introducing the product as well as when we made the decision to formally adopt the product and even still after introducing the product. I was amazed by the wealth of knowledge and the volume of information he was able to provide us; he gave accurate answers to our diverse questions. In addition, he thoroughly explained how the product could best be used in our company.”

Later, E Inc. succeeded in cutting material costs by 80% by changing the wire material from gold to silver. E Inc. is now considering the use of silver wires for other semiconductor packages. According to the company, it plans to launch its products with silver wires globally by using Tanaka Precious Metals Group’s total support system, which features plants in Japan as well as Singapore, Malaysia, China, and other countries.