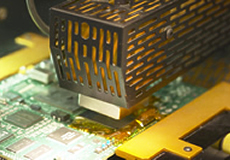 Just when you thought there could be no further productivity improvements and cost reductions.
What sort of plating can reduce production line downtime to one third?

The semiconductor market was growing significantly. Behind the upsurge was strong competition among domestic and foreign manufacturers tacking the critical issues of productivity improvements and cost reductions. The level of past corporate efforts was already starting to reach its limits, so new initiatives were required.

The last possibility for cost reductions was the parts replacement occurring six times a year on the production line.

As the semiconductor market continued on the road to recovery, semiconductor manufacturer Company A was hoping to quickly grab market share. For Company A, productivity improvements and cost reductions were paramount. However, it had already tackled the same issues in the past, having done all it could to make the majority of improvements. Even so, the company launched a new project to achieve further productivity improvements and cost reductions.
Mr. T from the Development Department was assigned to the project, so he started by researching the current situation on the production line. Soon after he began his research, Mr. T found one problem. Six times every year, the production line was stopped and productivity dropped off. One process in the manufacture of semiconductors is high temperature heating at 800°C. High temperature processing puts a load on the manufacturing equipment itself, which encourages internal corrosion and damage. For that reason, it was necessary to stop the production line to replace those parts.

Production line stoppages to replace parts had previously been treated as a priority issue within Company A. Even though it cost millions of yen each time they replaced parts, if they did not replace the parts then semiconductor product quality would noticeably drop. If poor quality products were to be mixed in with the company’s semiconductors, then it could lead to complaints and questions about Company A’s credibility. As a result, management and everyone else at Company A felt that parts replacement was just a fact of life.
For Development Department Mr. T, who was charged with finding even more effective initiatives than in the past, if the opportunity loss associated with downtime on the line could be improved, then it would mean success for his project. Thus began the challenge for Mr. T.

Mr. T began collecting information in order to tackle the challenge of improving productivity and reducing costs on the production line. He attended semiconductor industry exhibitions and seminars, and spent time searching on the Internet, etc. When he was starting to become frustrated by an inability to get any valuable information, he received some information from a TANAKA salesperson while dealing with a separate transaction.

“By plating the manufacturing equipment itself, you can improve durability and reduce production line downtime.”

Company A had previously placed orders with TanakaTANAKA for titanium electrodes coated with platinum, but had never considered the idea of plating the manufacturing equipment itself. The TanakaTANAKA salesperson told him that plating the manufacturing equipment itself would help reduce corrosion and damage, which could reduce the frequency of stoppages on the production line and could also reduce the length of any production downtime. 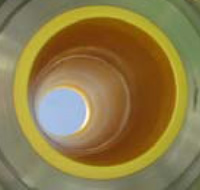 Never having thought about using this sort of plating in the past, Mr. T was both surprised and expectant of the possibilities. The proposal was enormously valuable when trialed, so after somehow gaining the approval of management, Company A immediately placed the order with TANAKA.

At the time, parts replacement on the manufacturing equipment occurred six times a year while the production line was stopped. With the new method of plating only those manufacturing equipment parts subjected to high temperatures though, Company A was able to reduce corrosion and damage to the equipment and to reduce downtime to one third by only replacing parts two times a year. In addition, they were able to reduce costs by about 40%.

Succeeding in improving productivity and reducing costs, Mr. T’s project was a success. With the increased competitiveness this gave Company A, it was able to take market share from competitors to put it one step ahead.

TANAKA is not just interested in manufacturing and delivering products, but also in collecting precious metals from factory scrap and from waste material generated by such things as end-of-life manufacturing equipment, and going on to return those metals to the market by recycling them into new products. The next time equipment has to be replaced,; Mr. T plans to put this gold plating to good use on the new equipment and to also ask TANAKA to help with the recycling.